Derailment and Congestion: New Indicators of Progress (Part 2 of 2 ) 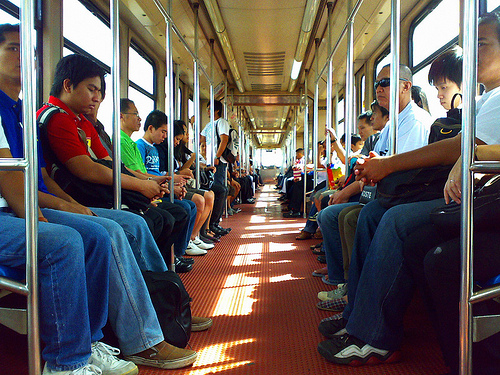 Bad traffic in the country’s main cities is a given so we won’t be emphasizing it any further. We’d just highlight the Palace PR Team’s spin on congested ports, as recycled from the bad-traffic-equals-booming-economy Aquino said last year. This time, Communications Secretary Herminio Coloma Jr. is saying that congestion at Manila’s ports shows that the economy is lively. Again, there’s some sense in this line of thinking although it would have been more sensible for the government to have anticipated all of these, to have done something to accommodate the increased use of ports and roads in an improving economy.

There’s a different kind of congestion we are eagerly anticipating, though. It’s the congestion of government money in the implementation of the remaining portion of this year’s budget and the budget for the next years. Aquino and his allies have been persistently arguing that the Disbursement Acceleration Program or DAP is vital to ensuring the country’s economic success. Now, with DAP outlawed by the Supreme Court, the country’s financial resources are supposed to suffer some bottleneck effect because Aquino cannot declare and use savings earlier.

Aquino may entangle himself in his own web of lies if the country’s GDP growth rate fails to reflect the major adversities he and his sycophants are insisting regarding the absence of DAP. Even Senator Drilon is admitting that DAP’s absence will only cause a 2% spending growth slowdown per quarter. That’s a very small amount and it does not even take into account the spending that will be pushed through because the President will no longer be unilaterally suspending funds for GAA-listed items to make DAP possible.

Certainly, Aquino will not want to lose face and be more convincingly tagged a lame duck by letting the economy falter. He and his economic team will most likely do everything to work things out for the country’s economy without relying on DAP. He really has no choice but to more thoughtfully prepare a budget that will enable the legally efficient management of funds. If he fails in properly handling the country’s economic performance next year, he will only lose his popularity further.

We’re not saying that congestion in public money spending is a good thing. What we’re postulating is that if we actually see significant congestion in the implementation of the country’s budget, it will be a good indicator for the need to revise our budget and government spending laws. It can be a good start in moving forward, in admitting mistakes and instituting reforms that will make government spending more efficient in the succeeding administrations. A material congestion in government spending will either show that Aquino is right with DAP or prove that Aquino is just like every other trapo who would willingly manipulate numbers to convince that he’s supposedly right in his assertions all along.The question is – will Aquino deliberately bring the economy down to demonstrate the supposed adversities of losing DAP? Or will people remain naive not to realize manipulations?

These are our responses to the Aquino government’s spinning game. Yes, we also see good things in derailments and congestions. At the very least, they can serve as precursors to realizing mistakes – the mistake of excessively patronizing or adulating a supposedly well-intentioned leader who is a product of national icons. Derailments and congestions can be indicators of the need to be more involved in the country’s governance. They indicate the continued development of Philippine democracy. They signify progress as political colors unfurl, with the public seeing the banes of personality-based politics.