Reactions on the killing of pine trees in SM Baguio 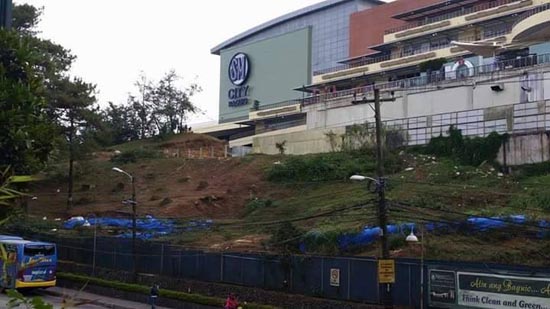 “It is horrifying that we have to fight our own government to save the environment.” Ansel Adams

(2nd update) Three years ago, I wrote about the plan of SM Baguio to earth-ball pine trees but this is tantamount to killing them as well. In April 2012, a local court in Baguio City released today a 72-hour temporary environmental protection order (TEPO) stopping the management of SM Investments Corporation (SMIC) from uprooting almost 200 trees as part of the SM Baguio mall development program.

Three years later, ‘Like a thief in the night,’ SM Baguio uproots pine trees. This Corporate giant “ is as greedy as they come and in one night cut 60 trees (according to them) even disregarding their earth-balling promise. But who would believe a lying corporation? Maybe there are more trees cut.”

But SM Baguio statement below shows that their actions were legal.

On December 2014, the Court of Appeals affirmed the Regional Trial Court’s dismissal of the environmental cases filed against SM and lifting of the Temporary Environmental Protection Order paving the way to do our Sky Park project in Baguio.

The project will also feature green facilities to help absorb the impact of climate change: a Sky Park, which feature green walls consisting of live plants that will help improve air quality, making the mall both relaxing and enjoyable for the whole family. It also consists of a sewerage treatment plant (STP), and an underground rainwater catchment tank in the basement. The excess space of catchment tank will provide additional parking space that will help decongest traffic along Upper Session Road.

SM mall in Baguio has secured the final approval and necessary permits for this project from the pertinent agencies. Prior to this, inputs from various community groups have been gathered and considered. The project affected 60 trees.

I am not sure if everything is legal in the first place. JP Fenix says Much ado about SM Baguio: Appeals Court affirms removal of pine trees legal and environmentally sound. Trees were uprooted and that is legal? Perhaps, but SM, along with its co-conspirators, violated the very spirit, the true intentions, of those laws. A comment in Facebook by Ivy Buenaobra had this to say:

SM has absolutely no regard for the sentiments of Baguio residents. They even promised us to earth ball the trees and redesign the mall expansion so that only 10 trees will be cut. LIARS. At around 1am, they started to cut and around 60 trees were gone the next morning. Their lawyers would say there is no legal impediment to SM’s actions but as always, the law is twisted for the benefit of the rich and powerful Henry Sy. They think that building a multi-level parking lot/mall extension will make the hill more attractive with a “sky garden” and fake plastic trees on top of the ugly structure. We Baguio residents call on everyone to support us, there are still 90 trees left out of the original 182, and we will take this case to the Supreme Court. 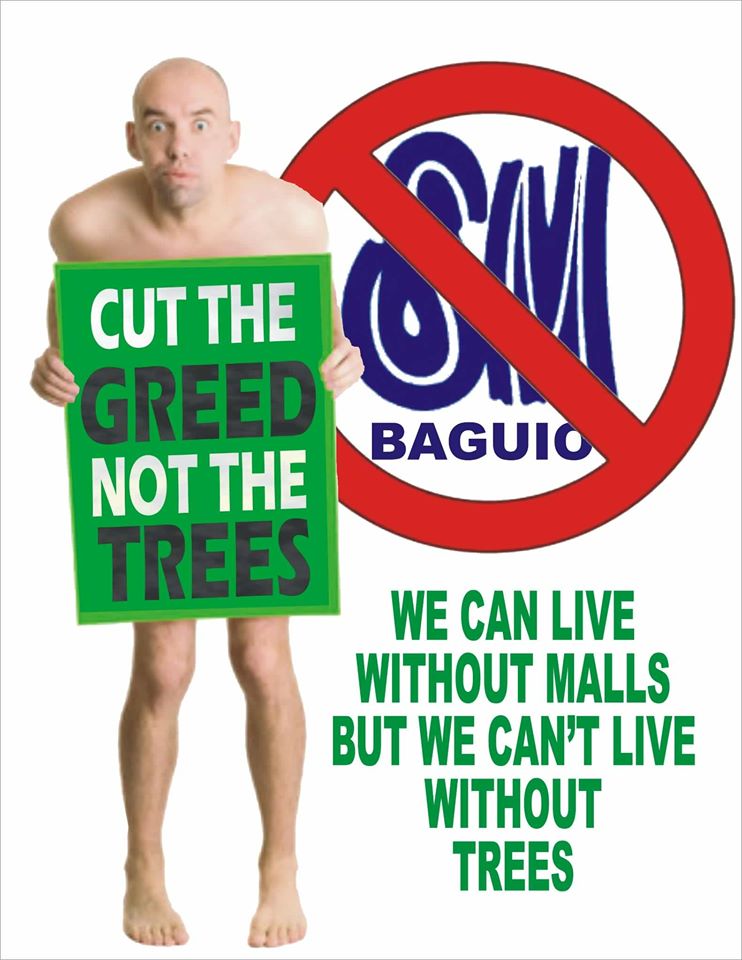 Michael Bengwayan says “The Court of Appeals ruled in favor of SM. There is only one way we can get back. BOYCOTT SM EVERYWHERE!” He adds :

We will have a long battle but i dont’ care. Sa kanila ang mga korte, ang city government, ang DENR at iba pa, but i will go around the country telling people of their tree cutting and their greed….educating people on the importance of trees.. I will tell people to boycott SM..

Karlo Marko Almonte writes about the The Death of Pine Trees on Luneta Hill: A ConspiracyTheory

Our environmental laws are designed to be circumvented – that’s how SM City Baguio got away with murder.

And to SM? A while back, they sent their emissaries led by Vice President Bien Mateo to present what was supposedly a re-designed expansion plan. In that meeting, attended by some members of the protest movement including Atty. Chris Donaal, Ms. Glo Abaeo, Mr. Gideon Omero, Mr. Nelson Alabanza, myself, et al, they said that out of all the remaining trees on Luneta Hill, maybe only less than ten will be affected with this new plan. Last night, 60 trees were cut.

Here are just some of the reactions of netizens on the cutting / uprooting of the pine trees in SM Baguio.