Social media and its impact on Philippine elections 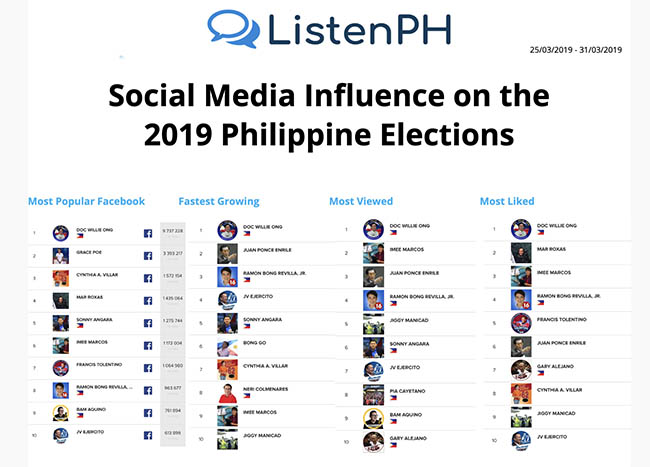 Now that the Philippine election day is next week, would social media have an impact in informing, and mobilizing voters? Or convince them to vote for a certain candidate? Social media was a game-changer in the 2016 elections according to the Asia Foundation, where it sparked political discourse never seen in the country’s election history. I now have my doubts about the social media engagement leading to the 2016 election after Facebook’s recent removal of accounts with coordinated inauthentic behavior.

I am looking forward to Facebook’s announcement of its first research grants to over 60 researchers from 30 academic institutions across 11 countries who are studying the impact of social media on democracy and elections. The research initiative began last year after revelations of foreign influence campaigns on the 2016 US election and the Brexit vote in Britain. It selected them under a review process by the Social Science Research Council and the independent group Social Science One.

“To assure the independence of the research and the researchers, Facebook did not play any role in the selection of the individuals or their projects and would have no role in directing the findings or conclusions of the research,” said Facebook executives Elliot Schrage and Chaya Nayak. Researchers would view which websites users linked out to between January 2017 and February 2019, and data from Crowdtangle, a tool used by publishers that shows them how content is being posted on Facebook. The Facebook data sets would include data on total shares from a URL, engagement statistics and fact-checking ratings from third parties.

These research studies would be useful to future elections. One study is on “False News on Facebook during the 2017 Chilean Elections,” which would examine the breadth, sharing and users’ consumption of misinformation on Facebook. Another study aims to investigate the demographic characteristics of users who shared mainstream and hyper-partisan news in Brazil in 2017 and 2018. There is “Understanding Problematic Sharing Behavior on Facebook,” including sharing dubious news and falsehoods. One just needs to visit tsek.ph, a collaborative fact-checking project for the Philippines’ 2019 elections, to see the extent of disinformation.

The Philippines might not be part of the current Facebook research but I am interested to see if “likes,” “most shared,” “most popular” in Facebook impact votes. Does social media popularity convert to actual votes? The April 2019 Nationwide Survey on the May 2019 Senatorial Elections of Pulse Asia shows an awareness level of 94 percent and above brings a Senate candidate closer to the magic 12. An awareness of 99 percent is not an assurance that respondents would vote for this Senate candidate yet a 96 percent awareness brought one candidate within the Top 12.

Speaking of awareness, the listening tool (https://influencers.listen.ph/phelections2019) of fellow blogger Anton Sheker provides Facebook insights. Together with my BlogWatch colleague, we monitor the stats for our internal use. The most popular, most viewed, fastest growing and most liked in the period of March 25- March 31, 2019 is Senate candidate Doc Willie Ong. 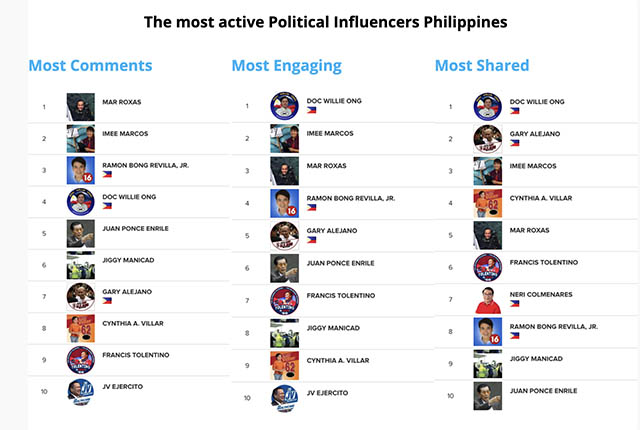 The listen.ph tool also shows Doc Ong is the most engaging and has the most shared posts. He also has the highest number of followers on Instagram. However, in the latest Pulse Asia survey, his awareness level is only at 57 percent. The Facebook stats of Doc Ong did not convert to offline awareness or some of the respondents have no access to the internet? 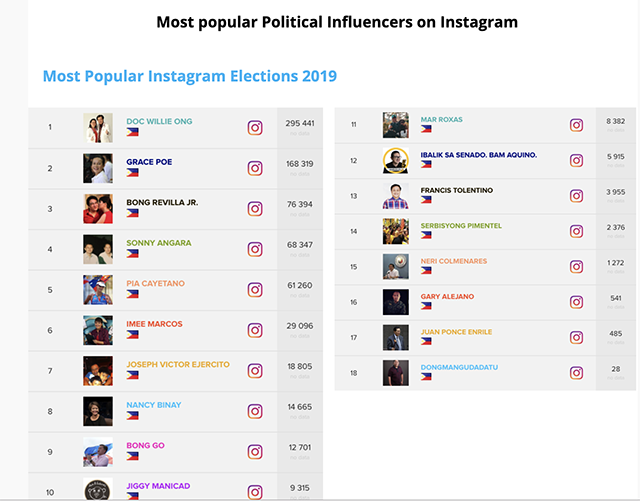 While raising awareness is important, increasing conversion rates is the next step. This means influencing a friend or family member to vote for a candidate. Word-of-mouth (WOM), is a source of information. When social media was not around, voters used WOM to decide based on opinions from their inner circle. Voters need accurate information on which to base their decisions. We must continue to find the truth and expose the lies that confronts us in our social media platforms. The impact of social media on the Philippine elections then relies on a call to action. One action is to influence five or more people who would influence five other people to vote your list of candidates. Tell personal stories of the candidates and not just their achievements. I observed on my social media posts that friends are asking who to vote for. One need not wait for these questions to appear on your messenger or on your friend’s wall post. Only eight days left before the elections. Let’s make each day count by raising awareness and convincing friends and family that separation and balance of powers is vital for a democratic government.