via the Philippine Online Chronicles.

At least 295 people were killed, including three Filipinos, when a Malaysian Airline passenger jet was allegedly shot down by rebels in Ukraine. 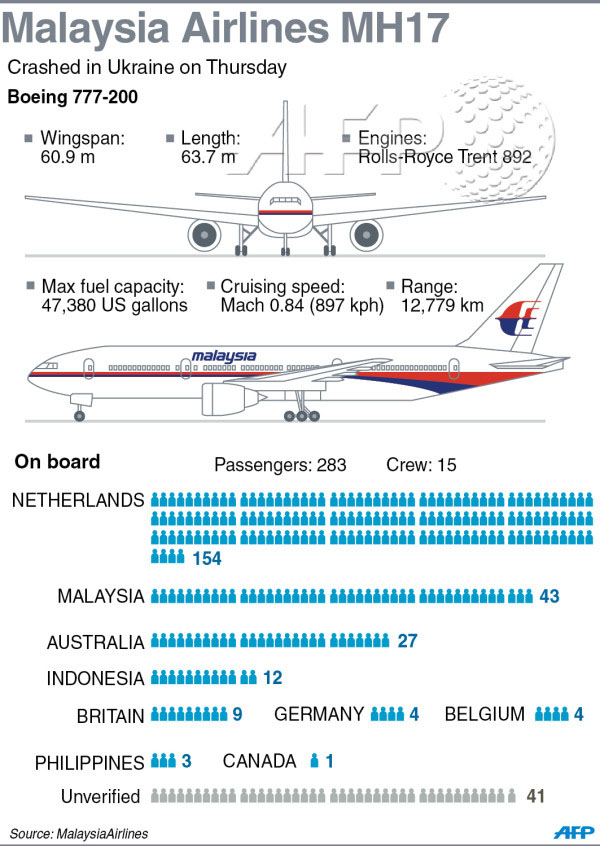 The Department of Foreign Affairs has already confirmed the deaths of the three Filipinos but did not release the names as they are still coordinating with both Malaysian and Dutch governments for information, GMA News reported.

Apart from the three Filipinos, the Independent reported that the flight included 154 Dutch, 27 Australians, 28 Malaysians, 11 Indonesians, four Germans, one Canadian and 15 members of the flight crew.

Malaysian Airlines, in a statement, said that flight MH 17 departed at Amsterdam at 12:15 p.m. (Amsterdam time) and was supposed to arrive at Kuala Lumpur at 6:10 a.m. (Malaysia time) the following day.

Ukraine’s traffic control, however, reported they lost contact with downed airplane at around 2:15 p.m., where, at that time, the MH 17 was supposed to be flying near the border between Ukraine and Russia, the British newspaper The Guardian reported.

The Guardian reported that “a strong smell of aviation fuel hung in the air as pro-Russian separatist fighters attempted to secure the area. Ten fire engines remained on the scene after rushing there to extinguish the many blazes by the crash.”

Malaysian prime minister Najib Razak said the MH 17 did not make any distress call. Investigators, Razak said in a report, “will leave no stone unturned.”

The United States has already confirmed that it was a missile who took down the plane but has yet to confirm on who it behind it, the CNN reported.

“We do not exclude that the plane was shot down and confirm that the Ukraine armed forces did not fire any targets in the sky,” Ukraine president Petro Poroshenko said in a statement.

Russian government, for its part, has also already denied involvement in the mishap, saying that it would be “stupidity” to shot down MH 17.