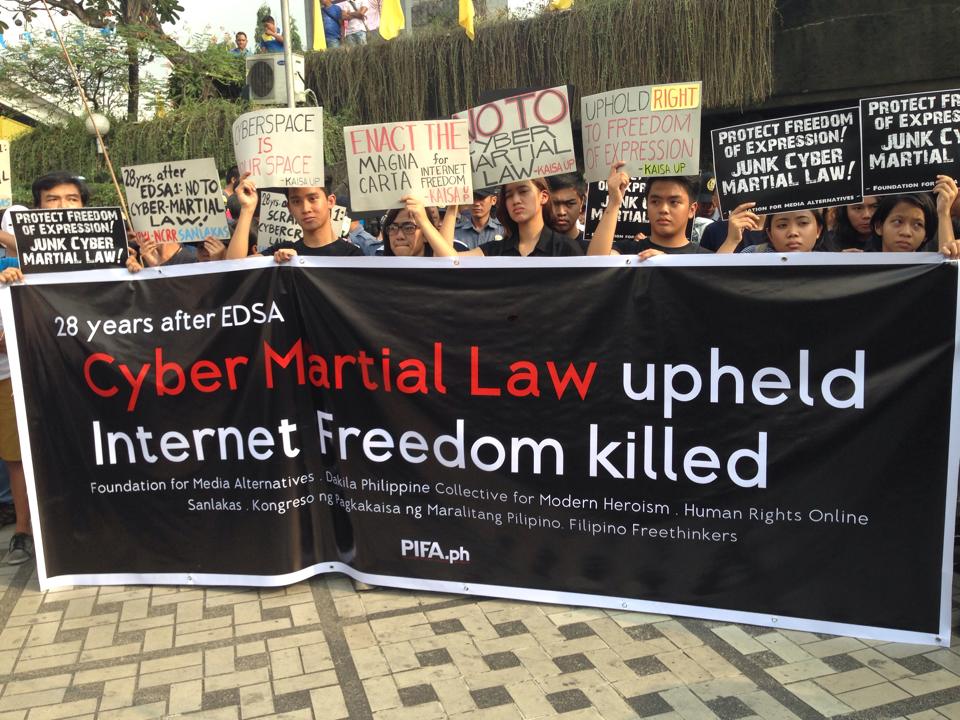 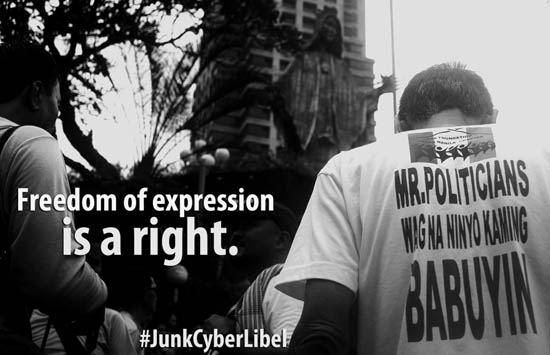 So, there was a rally this past Feb. 25, supposedly to protest the Supreme Court decision upholding R.A. 10175, more popularly known as the Anti-Cybercrime Law.  Rallyists want us to believe that the Anti-Cybercrime Law is “Cyber-Martial Law,” because it “stifles free speech.” While the “stifles free speech” part is fairly arguable (in fact three of the four dissenting opinions argue that the law does stifle free speech) the “Cyber Martial Law” bit requires a bit of revisit and review.

When the Anti-Cybercrime Law was first passed, it flew under the radar, mostly because the popularly contentious provisions were inserted during the bicameral committee deliberations.  We know that Senator Tito Sotto III was responsible for the libel provisions, but the more disconcerting portions were the “qualified aggravating circumstance” clause, the takedown clause, and the real-time monitoring clause, all apparently already in the law courtesy of the Department of Justice. Put these four together, and you had a virtually (pun intended) unrestricted power handed to the Executive in policing the Internet.

That totality was Cyber Martial Law. That was completely unacceptable. That was why we went to the Supreme Court.

And the Supreme Court responded in kind.

Not that there was much the Court could do, as nearly all of the opinions – including the concurring/dissenting ones – clearly laid out. We presented many avenues of attack – the “facial challenge,” the overbreadth angle, the “void for vagueness” approach, and the “strict scrutiny” doctrine; but in the end, the Court unanimously pronounced that there was no case or controversy for them to decide.  With no actual or threatened litigation (save possibly for the Disini petition, as noted in the Sereno opinion), the Court decided, in its majority opinion, on the basis of a facial challenge, that is, the charge that the law is invalid ”on its face” for infringing the constitutional right to free speech. For the rest of the challenges, the Court relied on the arguments our petitions could muster in the face of the presumption in favor of the constitutionality of laws.

Try as we did (some more than others), the Court has now decided that we were unable to overcome the presumption of constitutionality, save for the following provisions:

·       Section 12 that authorizes the collection or recording of traffic data in real-time; and

·       Section 19 of the same Act that authorizes the Department of Justice to restrict or block access to suspected Computer Data.

The Court also upheld “cyberlibel” in Sec. 4 (c) (4) only with respect to the original author, and struck down as unconstitutional the punishment of receiving and sharing libelous posts, as well as the “aiding and abetting” clause in Sec. 5 and the double jeopardy clause in Sec. 7, both with respect to libel among other crimes.

What puzzles me is that very little attention has given to the fact that two seriously flawed provisions – the takedown and real-time data collection clauses – were struck down, rendered nonexistent by the Supreme Court. Without these powers, “cyber martial law” practically ceases to exist. Government cannot, at a whim, take down Internet content or otherwise silence online discussion. Neither can government keep tabs on anyone on some flimsy notion of “due cause” without Court clearance. A major victory.

Instead, we’re talking largely about online libel, which has very clearly existed even before and without the Cybercrime Law. 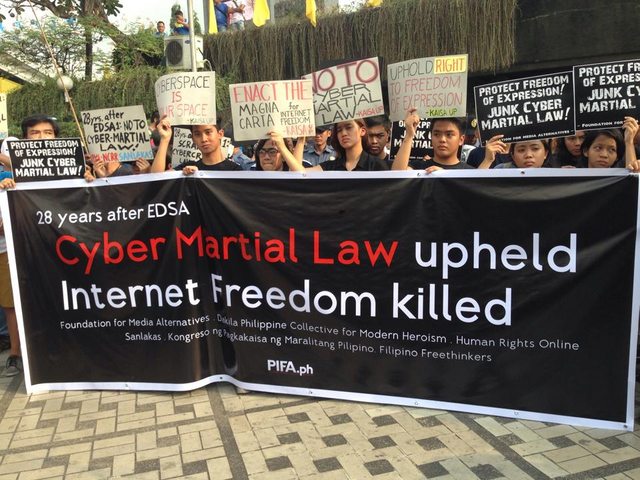 It disturbs me that the militant Left are the first ones to keep screaming “Cyber Martial Law” even after the takedown and real-time data collection clauses were struck down – you’d think the militant Left, with their history of struggle against the Marcos regime, would be all too familiar with what were the hallmarks of authoritarian rule, and what weren’t. And while, yes, the stifling of free speech is a component of authoritarian rule, the means by which the stifling is done is just as important, if not more so.

Today, free speech is stifled by the prospect of prosecution before a court of law, enabled by an offended party with deep pockets, and being subjected to the rigorous process of litigation. The worst case scenario is that the litigation drains the accused of resources, such that the accused may eventually cave in and accede to whatever the demands of the offended party may be. Be that as it may, in this scenario we have the elements of procedural and substantive due process in favor of the accused. The accused has legal defenses available to him, such as the Actual Malice and the Fair Comment doctrine in cases where the offended party is a public officer or public person. In our scenario today, imperfect as it is, the accused has the right and the opportunity to defend himself.

In an authoritarian regime such as that of the late President Marcos, free speech is stifled by warrantless arrests, kidnapping, solitary confinement, torture, and enforced disappearances. The worst case scenario is that you speak your mind in public, and a bunch of bodyguards kidnap you, interrogate you under the assumed fact that you are a member of some illegal underground movement, then finally torture you to death – just like what happened to Archimedes Trajano in August of 1977. In this scenario, you have no defense. You have no rights to due process. You have no right to your speech. You have no right to your life. At any given time, on the whim of the person in charge, your life may be forfeit, and there would be nothing you or your family could do.

THAT was Martial Law. THAT was tyranny. It is to THAT reality that, 28 years ago, we said “Never again!”

Online libel is NOT “Cyber Martial Law.” Not by any stretch of the imagination of a sane person. To force the comparison is to spit in the face of all those who died trying to win back the freedom we have today, however flawed it may be.

Meme by PCIJ. Photo by Noemi Lardizabal-Dado. Some rights reserved.