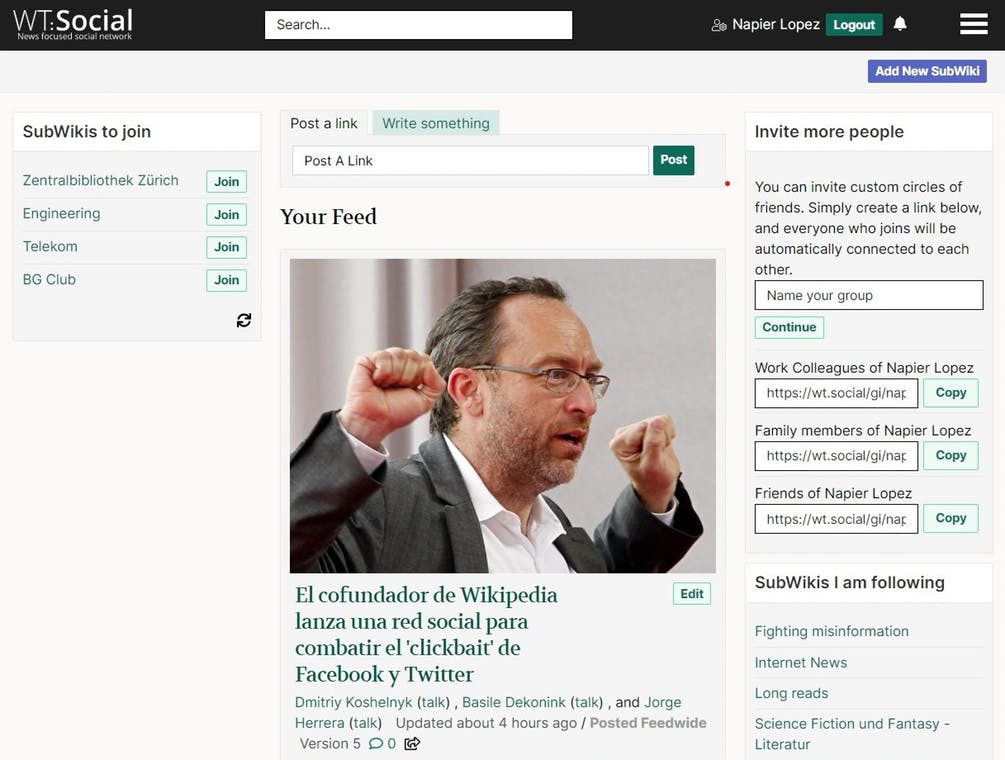 Frustrated with Facebook and Twitter for their “clickbait nonsense,” Jimmy Wales, a co-founder of Wikipedia, created WT.Social in October 2019. WT.Social  is a social networking service, in which users contribute to “SubWikis.” Unlike Facebook, WT.Social shows new content first instead of engagement. As of Dec. 11, 2019, 417,553 members have signed up. Though the platform is free to join, new sign-ups are placed on a waiting list, but could be bypassed if you donate money or use an invitation link from an existing member. A friend invited me, but I was the  68,000th person on the waiting list. Fortunately, I got in after two days.

More than the clickbait nonsense and ads, digital disinformation producers and actors abuse the freedom to use Facebook and Twitter. A  North Atlantic Treaty Organization (NATO) study reported four models of disinformation in the Philippines, such as the In-house Staff Model; Advertising and PR Model; Clickbait Model and the State-sponsored model. The latter leads to “silencing, self-censorship, and chilling effects among dissenters and the public.” Removing coordinated inauthentic behavior by Facebook is not that easy for them. Hybrid accounts (where a real person manages many fake accounts) are difficult to detect. One could just imagine the number of moderators needed to review pieces of content posted every day. Recommendations from the NATO study suggest a process-oriented rather than content-oriented policy response as the most effective solution to combat disinformation. Such interventions “should not be about speech regulation and censorship, which could potentially inflict myriad harms to free speech.”  Greater transparency and accountability in campaign finance, platform bans, fact-checking and industry regulation needs to be ensured.

A community of moderators that collaborate on news content in WT.Social was both a process-oriented and content-oriented response. The subject on “Fighting Misinformation” was one of the default sub-wikis when I joined. Climate change was a category I selected because there are just so much lies, propaganda and disinformation from both skeptics and alarmists. Will it work? Doc Ligot, a convener of the Consortium on Disinformation and Democracy thinks it is “an interesting reaction to the backlash against ads and privacy happening with Facebook and Twitter. The donation-volunteer model worked for Wikipedia for going on two decades, and if this gets enough user support it could work.” Right now, I am still observing the conversations in the communities I follow. Ligot said it is too early to have an impression on the functionality since it is a work in progress. If the momentum is maintained, and it delivers the unbiased newsfeed or topics along with zero ads, then it could be a good alternative. The potential as a powerful platform for consuming and sharing news is there but would need more tweaking as more users join.

Wales’ social network would rely on a community of users to enforce standards of good behavior. I expect this would work because Reddit’s r/politics could manage misinformation with its 5.6 million members. A Reddit moderator, “Qu1nlan” in an interview said when they see fake news, which is not correct, they encourage their user base to fact-check it themselves with a comment. An example is “well, here’s why this news is fake, and here are the sources to back it up. And here’s why you shouldn’t believe everything that you see on the Internet.” WT.Social model is different because other users could edit or delete content.

Tired with Facebook and Twitter? Then, WT.Social is for you. While Facebook or Twitter would still be my social media platforms, I would use WT.Social for niche communities on Climate Change and Fighting Misinformation. Before posting anything, check out “A Beginner’s Guide to WT.Social” thread. When you first “Write something” to create a post in a SubWiki or on your profile, one is given a choice between two radio buttons: Collaborative and Individual. Collaborative is best when you’re unsure of your information. Every post shows a detailed history showing changes made. Every post could be rolled back to an earlier version, only by you if it was initially set to Individual, or by anyone if set to Collaborative. While WT.Social still needs to increase its user base, I look forward to seeing it succeed as an alternative to Facebook and Twitter.