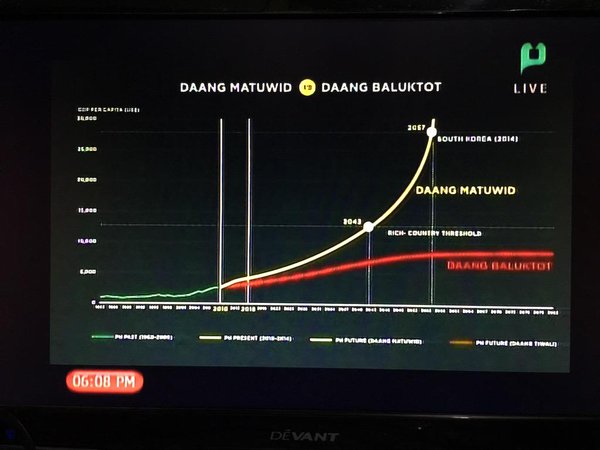 At his annual address to Congress earlier this year, Pres. Aquino told the nation to stick with his chosen successor at the 2016 elections. He claimed that if we followed the Straight Path (or Daang Matuwid) for the next two administrations, the Philippines would emerge as a first world country. He thus framed the next election as a referendum on his performance.

U/Sec Manolo Quezon (aka “The Explainer) calls it The Great Referendum. He provides the basis on which Aquino stakes his claim, courtesy of the National Economic Development Agency. NEDA estimates the past 5-year annual average GDP growth rate of the Philippines to be 6.2%, the fastest in forty years. If growth in 2015 hits 6.8% (which is highly unlikely-see the first three quarters of growth below), the 6-year average would be 6.3% the highest in 60 years.

NEDA then makes a startling projection: if Daang Matuwid persists, i.e. the current economic policies are kept, growth will accelerate to 6.7% in 2016 and beyond(!); but, if the policies are ditched and corruption ensues, then a gradual deceleration of 0.01 percentage points per year occurs from 2016 onwards.

What the government has done here is commit a flagrant error in modelling. It assumes that a structural policy shift will be felt indefinitely afterwards. It mistakenly sees the past as a good gauge of the future. Optimism bias causes the administration to overestimate the likelihood of positive events, and underestimate the likelihood of negative events. For instance, just consider the following:

Era of cheap borrowing coming to a close

Over the past seven years, Philippines benefited from very favorable conditions courtesy of the US Federal Reserve. Lower yields for US treasury notes, which the Philippines uses as a benchmark for auctioning its own debt instruments, allowed it to keep its budget under control, thanks in part to the tax reforms of the previous government. This boosted its credit ratings, which improved the ratings of private companies.

Confidence rose. Overseas remittances buoyed consumer spending.The peso appreciated.  The higher peso led to cheap imports used both for production and consumption. The price of crude oil also came down as a result of weaker global demand, which in turn fed into lower electricity rates, transport costs and the prices for domestic goods.

Later this month, however, things might change as the US Federal Reserve Chair could unwind its policy of cheap money on the back of an economy that has been showing positive signs of recovery. When interest rates in the US rise, investors who have parked their money in Philippine stocks and bonds will start repatriating them back to the US. The peso will weaken leading to more expensive imports, which will flow on to the cost of domestic goods.

To counteract this, the Bangko Sentral will have to raise its own rates. This will impact the cost of borrowing for local businesses, and flow on to the cost of goods and services they produce. In short, the next administration won’t have the benefit of cheap money. Economic growth could become more volatile, returning to its normal pattern of boom and bust prior to this era.

The drought causing El Nino weather pattern is expected to get more severe as average temperatures rise due to Climate Change. This means that the output of the agricultural sector, which still employs close to 30% of the workforce will be at risk in the coming years.

This would increase the likelihood of a food shortage which in turn would lead to greater food imports to keep prices in check. One thing is for sure, the income of farmers will diminish, causing weaker demand in the countryside, even if prices remain stable.

Government could ramp up spending to drought proof the economy, but as we have seen, even under the rubric of Daang Matuwid, many problems persist in the agriculture department. Even with two cabinet secretaries, one of whom was appointed to specifically focus on food security, many challenges remain.

Another source of worry is that the demand for our workers overseas could also peak in the coming years. One could argue that the growth experienced in the Philippines over the past decade has been fuelled by overseas remittances, as the nation overtook Mexico to become the third largest remittance sending country, after China and India.

So what will happen if these remittance flows peak? Statistics from the Philippine Overseas Employment Agency seem to indicate that deployment of workers overseas may have peaked or at least plateaued since 2013. While remittances are still rising, their growth is decelerating, in part due to a shift in the destination of workers, from West to East. As a result, average earnings and remittances could weaken further.

Since the Philippine economy is largely consumption driven, and much of the growth from that comes from remittances, if remittances start to peak and decline, it could be a major brake to the economy.

The so-called demographic ‘sweet spot’ might not pan out

The Philippines will continue to have a large, young workforce in the coming decades just as other countries (namely China) begin to experience a shrinking and aging workforce. This is the ‘sweet spot’ that is bandied about by some experts. It is assumed that it will make the Philippines more competitive in the eyes of investors.

The problem is that industrialization for late-comers is turning out to be quite daunting compared to how the West experienced it centuries ago. Generating mass employment for low-skilled workers through industrialization is becoming less tenable. The demand for menial labor is on the decline as advanced manufacturing increasingly turns to automation and as consumers in the West age. Manufacturing in emerging countries has started to peak early and decline, before incomes reach first world standards (see chart below).

Why manufacturing is no longer the growth-booster for emerging markets it used to be: https://t.co/B6caW91Sku pic.twitter.com/4aHEa0ZZXT

Even the services sector is not immune to this. Call centers and business process outsourcing firms are increasingly using algorithms and automated voice recognition to process customer information and requests. In a world where labor is quickly being turned into capital, how will populous nations like the Philippines fare?

Optimism bias by the administration in projecting the future could cloud our judgement not only in an electoral sense, but more importantly a policy one. Current economic conditions are as ideal as they can possibly be. What happens when they become less favorable? The rosy projections they make may not be robust enough to weather future economic turbulence.

When conditions change, who among the presidential aspirants can act decisively, not be paralyzed by analysis, to take on the challenge, be willing to innovate and adapt, take new approaches, when existing ones have failed?

The biggest risk, it may turn out, is not in disrupting the policies of Daang Matuwid already in place tomorrow. It could be in not anticipating dangerous twists and turns on the road ahead and in not protecting ourselves from them by modifying current policy settings today.