29 billion in DAP is unaccounted for, according to DBM itself 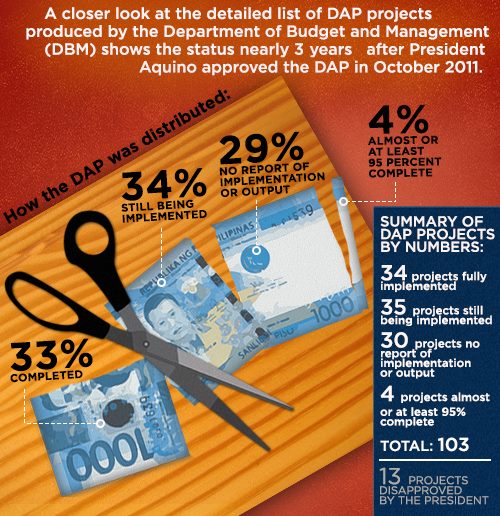 by  Troy Zarate de Leon as originally posted in Facebook

29 billion in DAP is unaccounted for according to the DBM itself.

In the DBM’s detailed DAP project list, P29.6 billion worth of project items have no report of actual output. In other words, it is not known if the projects were even implemented or if they exist.

The biggest DAP project item with no report of actual output was the P4.45-billion lump sum fund released for Priority Local Projects Nationwide for implementation by government-owned and controlled corporations, the Department of Education, Department of Public Works and Highways (DPWH) and local government units (LGUs).

Another big-budgeted DAP project item that has no status report of implementation was the P4-billion Public-Private Partnership released for School Infrastructure Project Phase 2 under the Department of Education.

The P700-million Development Assistance to the Province of Quezon has no detailed list of projects for implementation and no status report.

Even the P104.7-million DAP funds released to the Commission on Audit (COA) that were supposed to be used for IT infrastructure and hiring of litigation experts have no listed actual output.

In fact, COA Chairman Grace Pulido-Tan had admitted before a Senate committee that part of the DAP funds was used to buy a service vehicle for one of the commissioners.

The construction of the E-library building of the House of Representatives, listed as a beneficiary of DAP in June 2012, is among the projects that have not yet been completed.

Under the DBM DAP project list, the E-library building project has no status report.

ABS-CBN visited the construction site and found that so far only the building shell has been built.

But House Speaker Sonny Belmonte told ABS-CBN, the construction of the E-library is not being funded under the DAP.

In a text message, Belmonte said: “It was never funded from DAP because we never got money from DBM. They withheld P215m from our budget which we could have converted to savings. We just rounded off our request to 250m but never got any money including the 215M withheld from us.”

The state auditors said the money was spent for purposes other that for which they were intended.

Of the total amount, P933,955 came from priority development assistance fund (PDAF) allocations while P1,052,394 was sourced from DAP funds.

The Commission on Audit (COA) has uncovered numerous irregularities in the implementation of a P229.6-million milk feeding program under the Disbursement Acceleration Program (DAP) that benefitted 46 congressmen who supported the impeachment of former Supreme Court Chief Justice Renato Corona in 2011.

The Commission on Audit (COA) has unearthed a new pork barrel scam, this time involving nearly P515 million coursed through an agency under the Office of the President.

According to the newest COA report, copies of which have been sent to the House, the funds ended up in 18 foundations and non-government organizations (NGOs), some of which are identified with alleged pork barrel scam brains Janet Lim-Napoles.

The Commission on Audit (COA) has found irregularities in TESDA’s use of its funds sourced from the Aquino administration’s Disbursement Acceleration Program (DAP), which has been partly declared unconstitutional by the Supreme Court, a television report said.

According to a report on “State of the Nation with Jessica Soho” on Tuesday night, the auditing agency discovered that TESDA may have used some of the P1.1 billion DAP funds it received to finance “ghost scholars” in 2011.

“Sixty-one attended multiple training courses which were held simultaneously… It was impossible for these scholars to be present at the same time in several training programs held on overlapping dates,” the report said, quoting COA.

“Forty-six confirmed that they have never attended the subject training course while one could not remember the training program,” it added.

It also said 218 scholars could not be reached through their stated contact numbers.