Reclaiming the lost potential of the barangay 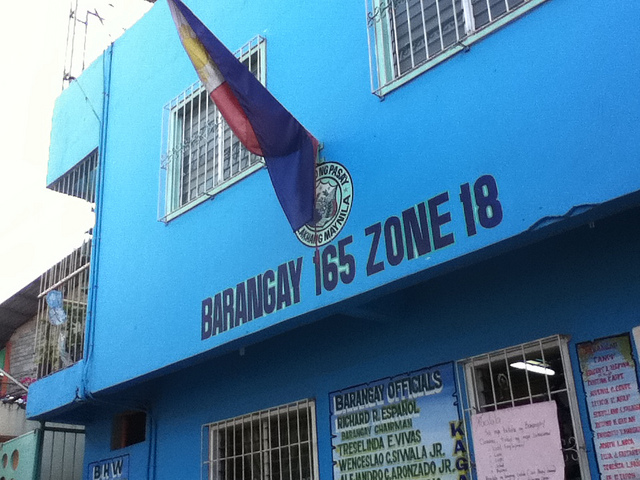 I am reposting this article from the Philippine Online Chronicles, written on October 23, 2013 to share awareness in the nationwide Barangay Assembly on March 29, 2014. There are more details at the the Facebook event Power to the People – #BrgyAssembly and the DILG memo

by Center for People Empowerment in Governance (CenPEG)

Envisioned 22 years ago under the Local Government Code, the barangay (village) was to serve as the basic administrative unit in the community – a grassroots governance system tasked with delivering basic health, social, and other government services. The barangay was also planned as a mechanism for participatory economic governance toward eliminating poverty, unemployment, and social inequality.

By the looks of it, this governance template has all but been forgotten.
Today, there is hardly any sign of human progress in a typical barangay most especially in the rural areas. There is of course the ubiquitous, hastily-built basketball court in the middle of the road and in the heart of the village the barangay center which also functions as a social hall at night. Then there is what looks like an unfinished bridge and what appears to be a short stretch of road of sub-standard materials.

The barangay cannot pass for a development model. It remains a vista of mass poverty which is no different from past decades: Up to 60% of the rural population is poor, more than 30% in the urban areas. Claimed GDP growth does not translate to food and jobs among majority of the villagers; income disparity between the rich and poor is widening by the day. What little mobility there is can be seen in people’s out-migration – toward town centers in search of odd jobs and destined to join clusters of informal settlers, or out of the country tucking away meager savings or borrowed money with family members left at home. In 2012, the number of Filipinos leaving the country every day reached 5,000 or up by 2,000 since 2010; a great number of this diaspora came from the rural barangays.

Two reasons push the barangay to continue sinking below the level of human development. As a basic governance unit, the barangay in most cases serves principally as an electoral base for local and national politicians. Another is that both national and local officials have not seriously considered the barangay as a basic development engine or, under the regime of devolution, as an effective machinery for basic social services.
Under the law, barangay elections are supposed to be non-partisan which also means candidates should not be party-affiliated. In reality, barangay officials are bound to a web of political clans from the president and Congress to local government units (LGUs) such as governors, mayors, and councilors. Barangay elections are critical to national and local elections: In the presidential race, for instance, barangay officials are expected to deliver the vote quotas through vote buying or other fraudulent means and enticements if necessary, orchestrated by campaign machineries run by mayors, governors, and other politicians. Similarly, the candidacy of barangay aspirants is bankrolled by town officials and politicians; payback time is during the next local elections. With the patronage money, positions, perks, and kickbacks in projects involved, barangay elections are highly partisan and hotly-contested. In the current polls, 6,000 barangays have been declared election hotspots; 100 people have been killed in election-related violence with the figure predicted to peak as the Oct. 28 election approaches.

In both the 2010 and 2013 barangay elections, the Commission on Elections (Comelec) has opted not to use the automated election system – and all the defective PCOS machines already bought – for fear that incredible results, technical failures, and other problems would trigger nationwide violence and anarchy.

Thus the politically-stagnant and economically unproductive barangay usually comes to life with every cycle of elections that are largely decided by vote buying, by how much is given to village supporters, by promises of pork barrel allocations, “emergency assistance,” and other forms of largesse. Barangays are poorly officially-funded and whatever money is spent legitimately goes usually to projects such as an overpriced road asphalting here or a bridge repair there. Instead of economic projects, health or education services, piecemeal infrastructures are preferred for limited expenditures since these serve as “epal” – politicians are credited for projects funded by people’s taxes primarily for election campaign visibility.

By law, the barangay development council (BDC) takes charge with promoting “inclusive economic growth” in the community. Most reports however show BDCs where these are organized are in form only and there is hardly any significant sign of barangay-led economic productivity taking place. In fact, based on government reports most barangays do not have any long-term or simple economic development plan – such as food security, cooperative development, livelihood, livestock dispersal, or fishery development – or consider it as a priority. Whatever socio-economic projects including disaster-mitigating programs exist are usually initiated by genuine NGOs or community organizations.

The devolution of basic services from national agencies to LGUs has been plagued not only by lack of funds and low priority but also by corruption. For instance, mounting reports show drug procurements that are supposed to be for indigent patients are riddled with overpricing, rigged biddings, short or ghost deliveries, and purchase of substandard items. How critical the health situation in the barangay has deteriorated is shown by the fact that out of 42,028 barangays only 38% have health stations covering roughly 34 million only of the 90mn-plus total population. Maintaining the limited health centers is also a source of local corruption. One report says that in one particular year nearly 70% of P1bn allocation for rural health expenses was lost to graft.

What programs are being done in the barangay are hardly known publicly – probably because there is hardly anything to speak of? An SWS survey conducted in 2012 reveals local officials publicize little about government programs, if any. In particular, plans, budget, procurement, and expenditures are unknown or vaguely known to 7 out of 10 residents. Yet, 80% of the respondents smell corruption going on particularly in the budget office, mayor’s office, health, and barangay center, as well as the local social welfare center. Look where the billions of pesos of pork barrel like the PDAF that lawmakers channeled to bogus NGOs and an alleged criminal syndicate have gone – certainly not to the barangays!

Indeed, traditional politicians from the country’s political clans wasted away the potential of the barangay by using it primarily as electoral base through fraudulent means, political deals, and corrupt practices to ensure their political hegemony. As a result, the barangay has served to make patronage politics resilient and people beholden to small favors and emergency assistance from local officials that are actually stolen from taxpayers’ money. Instead of being an institution for governance and economic growth, the local authority derived from elections – impaired as they are – is used to support the electoral mechanism of politicians at the LGU and national levels and serves as the base of dominant political clans. The people are consigned to being mere statistics of clan politics and their potential as governance and productive forces is misused for vicious political agenda or under-utilized.

There are admittedly some earnest efforts by many barangay officials to promote out-of-court mediation, settlement, and some order in response to domestic feuds and petty crimes thus indicating some capability for village administration as called for. Likewise surveys show majority of barangay residents are open to governance participation. In truth, however, such efforts are subjugated or are not allowed to develop further by the propensity of political patrons and higher officials to prime every barangay as a source of votes and basic campaign machinery. This in turn promotes a culture of dependency between the barangay and the higher levers of patronage; community life is forever trivialized and made decadent by the pervasive culture of beauty contests, jueteng, petty crimes, and all sorts of extravagant festivities and rituals.

Still the barangay as an institution is a basic political and economic unit that can promise an all-sided development. The human potential, resources, and opportunities for productivity that will make a country great are in the barangay. If welded together by a grassroots-driven development program, people-based leadership, new development models, and real participatory democracy the barangay – or the community that comprises it – is a powerful engine of growth. Removed from a permanent state of irrelevance – fragmented and isolated from one another by clan politics – the barangays can unleash their potential if galvanized together for national growth. As surveys show, grassroots communities are always eager to play a leading role in a truly “inclusive,” democratic governance system. It is when people are mobilized for common interests – not for the narrow, vested interests of the clans – that the barangay begins to breathe life.

In the first place, the governance mechanisms in the community must be transformed – involving the reconstitution of the levers of political power from the political clans to a new, highly-motivated corps of mass leaders. Even in the current traditional system of barangays, elections can be used to allow the emergence of new, change-driven leaders. Pro-poor political parties should raise the levels of election campaigns by making these issue-based while joining forces with broad, democratic movements and civil society groups to be able to reach out more broadly to barangay communities. The end-goal is to transform the community electoral base into empowered political base where people’s capabilities in self-governance are honed. Direct legal and political engagements with the powers that be at all levels and at the very institutions of traditional political power – from the presidency, to Congress, and the LGUs – should be mobilized allowing the masses to gain trust and confidence in themselves in the long, arduous struggle for people’s governance.

All these can be done in the short term as people continue to empower themselves in removing the instrumentalities of elite rule – such as the pork barrel system – and push hard for the dismantling of the system of patronage – of political dynasties in particular – that is a major institutional gridlock to a just and lasting development for the people.

Will the Oct. 28 barangay elections pave the way for true empowerment of the people in the communities? By the looks of it and with the escalating tensions on the local campaign trail the exercise is proving to be just the start of an intense rivalry toward the 2016 presidential derby.

Image by Lance Catedral from Flickr.com. Used under CC license. Some rights reserved.