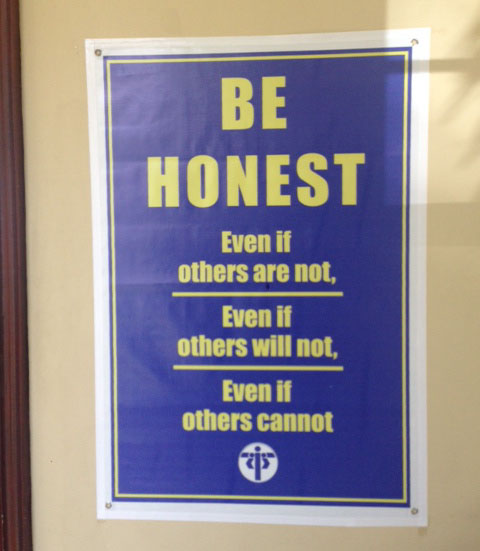 “Can I be honest with you?”

“To tell you honestly…”

How often do we hear the above phrases/expressions? I asked my 15-year old son what he thinks of a person who says these things. He said he has the impression this person only tells the truth occasionally, that most of what he says are lies. Well, out of the mouths of babes come truths adults may not think of.

I remember a practice of Quakers. “Quakers (or Friends, as they refer to themselves) are members of a family of religious movements collectively known as the Religious Society of Friends.” (Wikipedia) They don’t say or pledge oaths because they think and believe that telling the truth should be a way of life and not only when one is compelled or obliged to do so.

Perhaps, honesty is a value that seems to be going out of style. One just needs to watch television, listen to what the personalities and public officials say and feel a chill down one’s spine and disbelief that feels as if an ax is about to fall on one’s head. At the back of one’s mind will always be the question, “how true is this?” Some people have made it a habit to twist some facts that they don’t know how to straighten them out in the end anymore. In the long run, some lies which have been stretched to the limit appear as truths.

Watching our elected Senators on television hurl accusations on one another, on other public officials, on the President, makes me shudder in my seat and think if they who notice the speck in other people’s eyes have not taken off the log in their own. I would wonder how much of what they say in their privilege speeches are true, how much are fabricated and how much are merely rhetoric. If they have not wasted time lambasting people, they would have passed important laws already.

A grain of truth sown will surely reap a hundredfold of good for everyone.

Originally posted by Lakwatserang Paruparo at the Philippine Online Chronicles.