#ThisHappened : one of the top Twitter global news-related hashtags in 2019 is #ClimateStrike 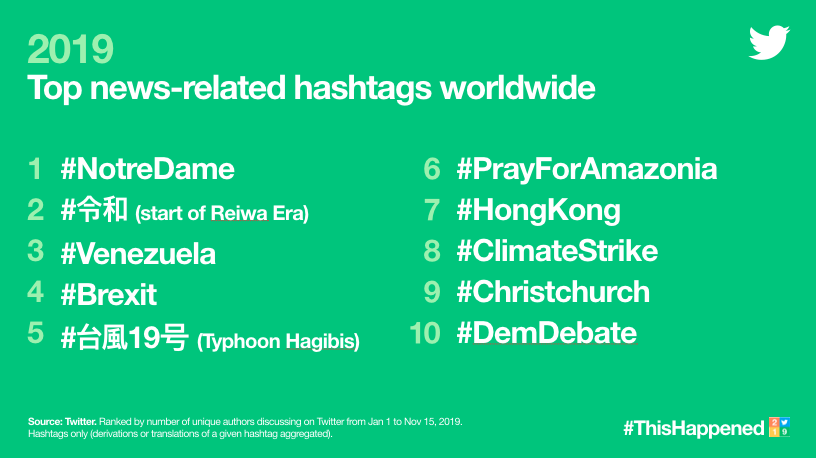 What were the year’s hot issues on Twitter? Every year, Twitter releases #ThisHappened, the most tweeted hashtags. Trending moments in the Philippines were in entertainment, Korean pop music, brands, emojis and sports. Maine Mendoza is the top account most tweeted about. Interestingly, #MaineMendoza nailed the top hashtag. The Twitter Philippines (@twitterPH) timeline did not publish the dominant news-related hashtags in the Philippines. So, I went through the global Top 10 news-related hashtags, which include #NotreDame, Start of the Reiwa era; #Venezuela, #Brexit, Typhoon Hagibis, #PrayForAmazona, #Hongkong, #ClimateStrike, #ChristChurch and #DemDebate. 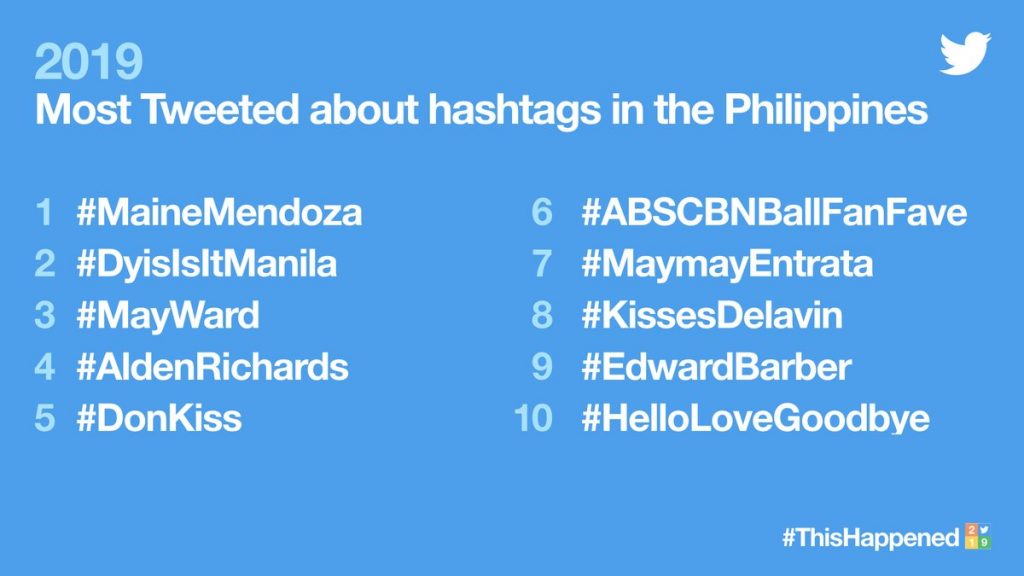 Twitter trending topics is where I draw inspiration for some of my articles. I have featured three topics in this column. My daughter’s passion in protecting our environment prompted me to write about #ClimateStrike at the ‹#CoveringClimateNow and social movements, #FridaysForFuture and #ExtinctionRebellion (Sept. 22, 2019). Meeting Josh Wong in Berlin gave me the opportunity to describe ‘How protest technology is being used by the leaderless movement in Hong Kong” (Sept. 15, 2019). The hashtag #PrayForAmazona compelled me to address climate change by calling out for more people to “Stand up for our environment” (Aug. 25, 2019) and ‹Harnessing community involvement in protecting our forests’ (Aug. 11,2019).

Greta Thunberg, Time Person of the Year 2019, inspired many hashtags such as #climatestrike which has reached the Philippine youth. The Zero Waste Youth Pilipinas (https://www.facebook.com/ZeroWasteYouthPilipinas/) is the Philippines counterpart for the Fridays for Future. Filipino youths are leading the call for urgent and ambitious actions by organizing #ClimateStrikes happening around the country. Alcides Velasquez, a researcher on social media and political activism and participation at the University of Kansas says, “There is a perception among adults that children would be more effective at trumpeting future-looking messages.”

Our youth learn from observing people similar to them. “If you want young people to get involved, showing them that another teenager could do this type of stuff would be very empo­wering,” Velasquez added. I chatted to a close friend of mine whose daughter in High School joins Climate strikes in Metro Manila. Joining the Climate strike is not just because it is a global movement. Both the school and parents encourage less carbon footprint living. They encourage recycled materials.

Youth activism experts say “2019 looks a lot like the 1960s” and that “the unit of activism today is probably the tweet.” Young people around the world are trying to get the government to pay attention to issues close to their hearts whether it’s the deforestation in the Amazon or the Hong Kong protestors on the extradition bill. Thunberg dominates most of her conversations on twitter. The topic captivates her audience because it is a global phenomena and affects their future. Focusing on policy goals and engaging with elected officials or other governments is part of their call to action.

We could learn from Thunberg’s approach to win the hearts and minds of the world.

1. Facts based narrative is more effective. Thunberg refers often to figures released by the Intergovernmental Panel on Climate Change in October 2018 on the impact of 1.5 degrees Celsius of global warming.

2. Provocative words without being too aggressive grab attention. An example is her words to the world leaders in “How dare you? You have stolen my dreams and my childhood.”

3. Providing solutions and actionable plans. Though it is challenging to keep carbon emissions level low, every action counts. Thunberg’s speech and the climate strike movement that drew millions to the streets sparked real progress on this issue.

“How the #BabaeAko hashtag campaign cultivated a movement” (July 8, 2018) lists most of the tips on how to evolve from a social campaign to a movement. Though social media networks are being used by disinformation producers and actors, advocating a call to action to a problem is possible. While social media tools are a central component of almost any movement, there is more work ahead such as providing a platform for those without access to the internet, giving voice to the voiceless, and advocating social media for good. Trending hashtags grab media attention which could lead to a movement. An attitudinal shift could happen by transforming anger into a global movement calling for urgent change. #ThisHappened2019 in the news and other topics wraps up the decade. I am looking forward with hope to what is tweeting in 2020 and beyond.

First published on Sunday Business & IT on December 22, 2019