The “misuse” of psychological assessment vs CJ Sereno 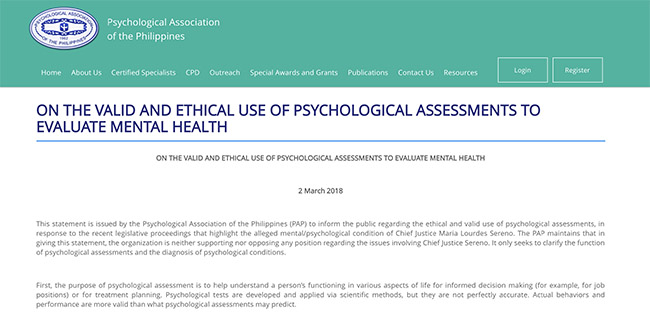 The PAP statement adds that they uphold the dignity of every human being and  reject recent narratives that directly or indirectly use psychological assessments to stigmatize those with mental or psychological conditions. It condemns the unethical practice of using confidential psychological information for purposes of discrediting or damaging a person’s character. Even if psychological test results become public documents, this does not grant permission for anybody to use it for any purpose other than its original intent.

In a closed session ,Geraldine Tria, clinical psychologist and “expert witness” or amicus curiae to the impeachment committee, stated categorically on Tuesday, February 27, that she would not have recommended Sereno to the top judicial post, “based on the findings” and her assessment of the top official’s personality. She added, “You have 9 manifestations, and there are strong indicators that 5 out of 9  actually manifested, like grandiosity, unlimited power, sense of entitlement, interpersonally exploitative in order to take advantage of others in order to achieve his or her end, lack of empathy and sensitiveness to the needs of other members in the community”.