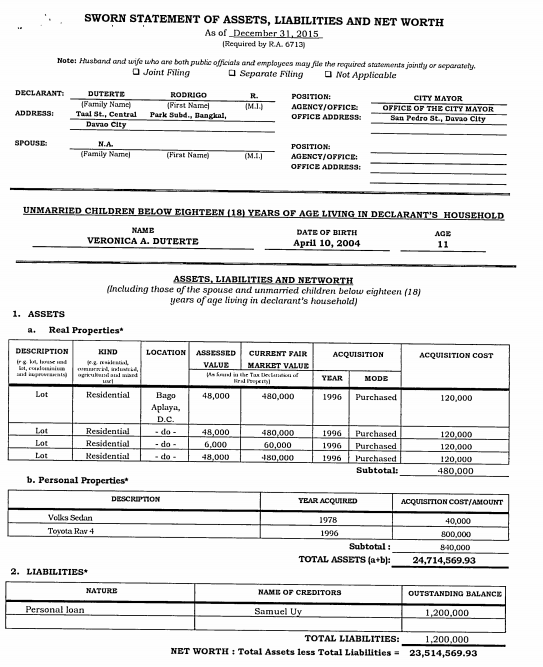 SO HOW much is he really worth?

According to his 2015 Statement of Assets, Liabilities, and Net Worth or SALN, presidential frontrunner and Davao City Mayor Rodrigo R. Duterte has a net worth for 2015 of only P23,514,569.93, or a slight P1,54-million increase in his declared net worth in 2014.

In contrast, until yesterday noon, Vice President Jejomar ‘Jojo’ C. Binay, another candidate for president, had yet to file his SALN for 2015 with the Office of the Ombudsman. Meanwhile, there is a waiting period of 10 working days to secure the 2015 SALNs of fellow presidentiables Senators Grace Poe and Miriam Defensor-Santiago – that is, if they have already submitted these. Former Interior and Local Governments Secretary Manuel ‘Mar’ Roxas II, though, will not have to file a SALN this time around, since he is no longer a government official.

Interest in Duterte’s SALNs has surged following allegations that he has bank accounts through which hundreds of millions of pesos have supposed passed through. For sure, certified bank records may be needed for anyone to prove or disprove such allegations. But what Duterte’s SALNs do show is a phenomenal growth rate over the last 19 years.

The earliest SALN Duterte had filed that is on PCIJ’s archives is for the year 1997, in which he declared a net worth of only P897,792.

And then there is the case of Poe, presidential bet of the Galing at Puso slate, which is one of progressively declining wealth. Poe declared a net worth of P152.5 million in 2010, but this slipped steadily to P89.46 million in her SALN for 2014, for a net regression of 41.34 percent in four years, or negative 10.32 percent on average per year.

For instance, in his latest SALN for 2015 that PCIJ obtained from the Office of the Ombudsman, Duterte said he also owned:

He said he acquired these lots, all located in Bago Aplaya, Davao City, between 1995 and 1996.

In a separate page, however, Duterte listed a second set of “assets, liabilities, and net worth” and additional properties “including those of the spouse and unmarried children below 18 years of age being in the declarant’s household.”

Duterte named his 11-year-old daughter by his second partner in this separate assets list.

Yet still on another page of his 2015 SALN, Duterte listed a third set of real properties that he noted were “purchased through the exclusive funds of (the mother of his 11-year-old daughter), Cielito S. Avancena.”

This third set of properties includes three lots — two agricultural and one residential — located in Matina, Malagos, and Catigan, all in Davao City; and two house and lots in Matina; Davao City.

Duterte valued this final set of real properties at P3.08 million, by acquisition cost.
On this separate page, too, Duterte listed a “personal loan” of P1.2 million from a certain “Samuel Uy”.

As in his 2014 SALN, in his 2015 SALN Duterte listed having six relatives in the government service. They are:

Nineteen years ago, when he was a congressman from Davao City, Duterte had

Notably, like his net worth, Duterte’s “cash on hand/in bank” has charted an upward trek in the last two decades, save for one year.

For details on the wealth of the candidates, check out PCIJ’s Money Politics Online