The All-Dumb phenomenon in political packaging and marketing

Raring to see more of the All-Dumb phenomenon? Observe political ads. They are either dumbly conceptualized or are under the assumption that Filipinos are too dumb not to see through the deception, misrepresentation, and lies.

Seriously? Whoever is behind this ad needs some serious cerebral shaking not just for a reality check but to fix their sense of logic. How can Romualdez use the buzzword “mabilis” (mabilis na naibalik ang magandang edukasyon…naitayo ang mga ospital…naibigay ang tulong hanapbuhay) when a Romualdez politician was interviewed several times complaining about the slow progress of Yolanda rehabilitation? What “mabilis” is his political ad talking about? Instead of attracting voters, his ad will most likely be one major reason for people to never even think of giving him their votes.

According to the ad of former Valenzuela Congressman and Mayor Sherwin “Win” Gatchalian, it’s time for voters to get to know somebody unknown and new. It’s a brilliant idea capitalizing on his supposed lack of fame or prominence. However, is he really that unknown? Just like VP Binay, he is known for his text blasts. He has served as congressman and has been in the news many a time. Over the years, he has been working on making the public aware of him. He even competed with the notorious Binay in being one of the first to release political ads disguised as infomercials.

It doesn’t help that he is claiming in his ads that “he gave” (nagbigay) thousands of scholarships, free school supplies, and feeding programs for thousands of children as if he used his own money to provide all of these. Does he really think people are too dumb not to realize the deceit and misleading claims?

[youtube https://www.youtube.com/watch?v=KauqqWLkiiM]
Borrowing the words of Noynoy Aquino, ”Saan kaya siya kumukuha ng kapal ng mukha?” MMDA Chairman Tolentino apparently has decided that he will abandon all moral and personal inhibitions to indurately pursue his bid for a Senate seat using all the resources he can get from his agency. From the MMDA ads to the earthquake infomercials and the subsequent “thank-you-for-your-earthquake-drill-participation-let’s-make-this-national” ad, MMDA Chairman Francis Tolentino looks bent on not wasting any opportunity to make use of government resources to advance his personal agenda.

Admittedly, there’s nothing dumb about these abuses. It takes a sinisterly cunning mind and guts to use government resources for an election bid. What’s dumb is Tolentino’s packaging. He claims to be “matino” (righteous) and “matulungin” (helpful) with his dumb “Tulong-tino” slogan (or moniker?). The slogan is simply a hardsell. It sounds awful and is remotely memorable. Together with his ill-advised logo and the cringeworthy acting and conceptualizing in his ads, it’s safe to say that he has not won the voters’ hearts.

What tulong has he done and what tino has he demonstrated so far? There are even rumors that he wants the PNP Highway Patrol Group to fail in bringing about significant improvements to the metro traffic situation. He tried a publicity stunt by personally manning the traffic after he was criticized for abandoning his MMDA duties to go on a premature campaigning tour with Mar Roxas, but this only backfired and exposed his trapo tendencies. His packaging and marketing efforts smack of self-mockery. It’s like his campaign was thought out by a toddler. Well, if these would prevent him from winning, perhaps discerning voters can only be thankful. 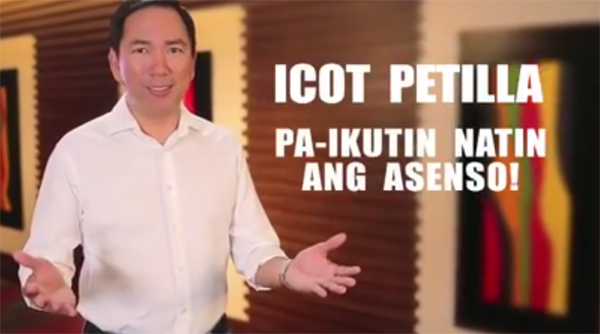 Screengrab from /www.facebook.com/icotpetilla. Some rights reserved.

Resigned Department of Energy Secretary Jericho “Icot” Petilla says in his political ad that his world revolves around his work, in giving service, and in fighting for his principles. (Umiikot ang mundo ko sa aking trabaho sa pagbigay ng serbisyo sa pakikipaglaban ng prinsipyo). So, he forgot about his family? To force the “Icot” buzzword, he is willing to make himself appear overly workaholic that his family does not carry as much weight as his role as a public servant and advocate? It’s quite obvious, pinapa-Icot niya lang ang mga botante. Cue in that Sarah Geronimo song!

Davao Mayor Rodrigo Duterte, also endearingly called Digong by his fans, is perhaps the would-be presidentiable with the most sophisticated campaign strategy. It’s difficult to figure out what he is doing and what he really wants to do. Reliable sources claim that he really intends to make the 2016 presidential elections a four-way fight, with him competing for votes against Grace Poe, Mar Roxas, and Jejomar Binay. However, he just recently announced that his final decision is to not run for president. He even said that he would retire from politics.

Some say that all of these are part of Duterte’s strategy. Realizing how he is still far from the figures of the survey topnotchers, his team just wants people to create a bigger clamor. Considering how Duterte continues to visit different parts of the country (in the guise of promoting federalism), the number of Duterte ads on TV and radio, and the eager social media promotions, it’s not difficult to believe that the popular Davao mayor really has intentions to join the 2016 presidential derby. 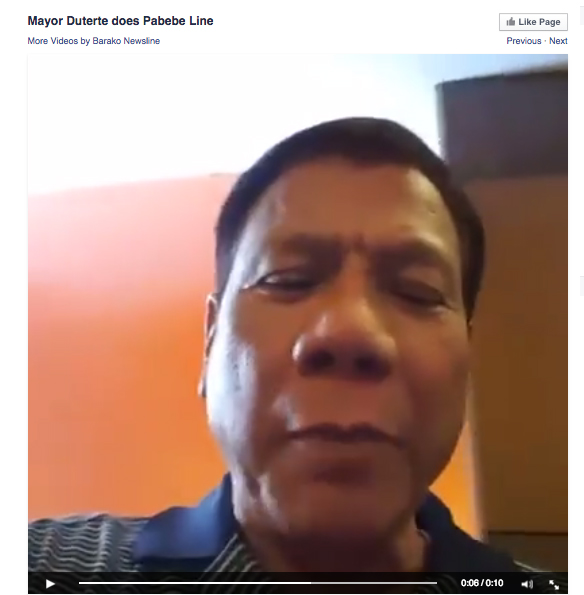 Screengrab via .facebook.com/BarakoNewsline. Some rights reserved.

Being ambiguous with his plans is not a dumb idea. Duterte may have even considerably multiplied his public awareness levels because of this. However, the many things he has done recently don’t appear wise. Doing a cheap stunt like his “Pabebe” video on Facebook, saying that Filipinos are not ready for his leadership style, being proud in demonstrating his complete disregard for the rule of law by making a tourist swallow a cigarette butt, and whimsically setting conditions for him to run every so often only make him less and less palatable to voters.

#TraPoe is trending and you can’t blame netizens for it after hearing Grace Poe’s announcement to run for the presidency. Finally, Senator Grace Poe has declared her plan for 2016 but it appears he will be losing some supporters in the process. Whose brilliant mind decided to package Poe in the same way Aquino was packaged? Why did she have to use the dead Fernando Poe again? Isn’t it enough that she changed her Llamanzares surname to Poe that she still needs to use FPJ’s campaign song and play her father’s movies to entertain supporters?

Why did she have to talk the way she did? She seemed to have lost the composure she showed as a senator especially when she handled the Mamasapano probe. In her Wednesday evening speech, she sounded like an overly excited politician who wants to please her audience. Who wrote her speech? It sounded like a typical speech recited by traditional politicians. 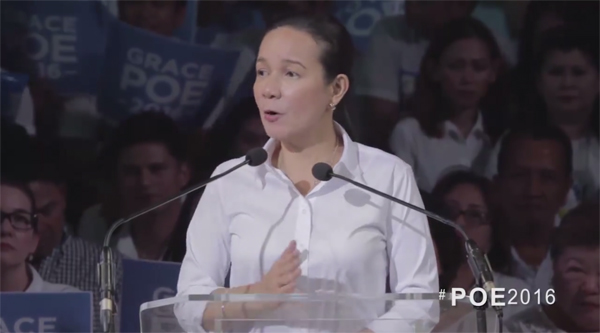 Screengrab via acebook.com/sengracepoe. Some rights reserved.

Also, why did she have to continue praising Noynoy? If she really believes in the President, she should have negotiated with Noynoy to become his anointed or agree to have herself relegated to being the VP bet. If she has reservations against the Liberal Party, she should say it. If she does not think Mar Roxas is going to be a good president, she should just say it. By deciding to run for president while asserting that Aquino has been a good president, she is only showing her self-centered ambition. She should have a compelling reason in running against Noynoy’s candidate other than her own political ambition. It’s dumb for Grace Poe to make herself look less worthy by acting trapo on the very day of her declaration to run. She already had a great start. She should have learned something from the fuss over her INC comments.

This is a paid advertisement

Lastly, it’s worth noticing how this popular line will likely become many discerning Filipinos’ pet peeve in the next months. Every political ad or infomercial flashes this line at the end: “This is a paid advertisement.” Of course everyone knows it’s a paid advertisement! Why would TV stations run these ads if they weren’t paid? Whose brilliant idea is this? The “paid for…” line used before was more sensible, albeit marginally.

Hopefully, the All-Dumb phenomenon wears out soon. This country needs to see normal-acting politicians who are not just trying to play with voters’ fantasies and emotions.