Who is this diplomat ? Bad behavior at closing time 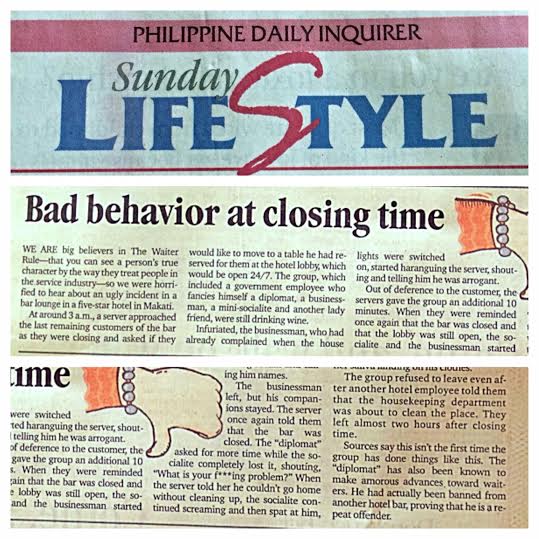 We are big believers of The Waiter Rule – that you can see a person’s true character by the way they treat people in the service industry – so were horrified to hear about an ugly incident in a bar lounge at a five-star hotel in Makati.

At around 3 a.m., a server approached the last remaining customers as they were closing and asked if they would like to move to a table he had reserved from them at the hotel lobby which would be open 24/7. The group, which included a government employee who fancies himself a diplomat, a businessman, a socialite and another lady friend were still drinking wine.

Infuriated, the businessman who had already complained when the house lights were switched on, started haranguing the server, shouting and telling him he was arrogant.

Out of deference to the customer, the servers gave the group an additional ten minutes. When they were reminded once again that the bar was closed and that the lobby was still open, the socialite and the businessman started screaming at him and calling him names.

The businessman left but his companions stayed. The server once again told them that the bar was closed. The “diplomat” asked for more time while the socialite completely lost it, shouting, “What is your f***ing problem?” When the server told her he couldn’t go home without cleaning up, the socialite continued screaming and then spat at him, her saliva landing on his clothes.

The group refused to leave even after another hotel employee told them that the housekeeping department was about to clean the place. They left almost two hours after closing time.

Sources say this isn’t the first time the group has done things like this. When not rude to waiters, the “diplomat” has also been known to make amorous advances towards the wait staff. He had actually been banned from another hotel bar, proving that he is a repeat waiter offender.