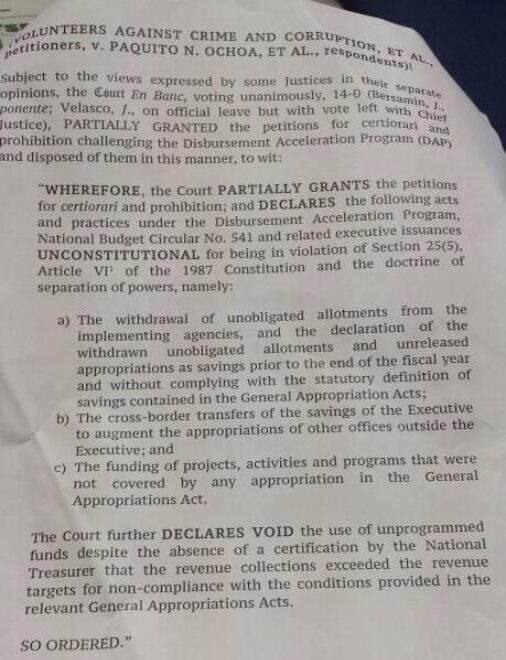 The Supreme Court on Tuesday ruled that the salient provisions under the Aquino government’s Disbursement Acceleration Program (DAP) are unconstitutional.

Voting 13-0-1, the SC justices declared the following acts under the DAP as unconstitutional: withdrawal of unobligated allotments from the implementing agencies; cross-border transfers of savings of the executive department to offices outside the executive department; and funding of projects, activities, programs not covered by appropriations in the General Appropriations Act (GAA).

Justice Teresita de Castra inhibited from the voting while Justice Presbitero Velasco gave his vote to Chief Justice Maria Lourdes Sereno as he was on official leave.

SC Spokesperson Theodore Te said the three acts violated Section 25 (5) Article VI of the 1987 Constitution and the doctrines of separation of powers.

The said constitutional provision states that “no law shall be passed authorizing any transfer of appropriations; however, the President, the President of the Senate, the Speaker of the House of Representatives, the Chief Justice of the Supreme Court, and the heads of Constitutional Commissions may, by law, be authorized to augment any item in the general appropriations law for their respective offices from savings in other items of their respective appropriations.”

Te explained in a report that with the ruling, the SC also voids the use of unprogrammed funds despite the absence of a certification by the National Treasurer that the revenue collections exceeded the revenue targets or non-compliance with the conditions provided in the relevant GAA.

Under DAP, the Department of Budget Management with the President’s approval realigned “savings” or accumulated funds to augment existing programs and projects of other agencies, including those that are not under the executive branch.

Petitioners however have argued that DAP funds could not be “savings” since the projects or programs from which they were withdrawn have not been completed, or discontinued or abandoned.

Bagong Alyansang Makabayan (Bayan), one of the nine petitioners against DAP, welcomed the SC ruling.

“As petitioners, we are happy with the declaration of programs and issuances under DAP, including DBM Circular 541 as unconstitutional. It is a blow to presidential lump sum and discretionary spending or presidential pork under Aquino,” Bayan secretary-general Reato Reyes Jr. said in a report.

“The big challenge now is accountability. We will pursue this for sure. Aquino and Abad should be answerable to the people,” Reyes added.

Senator Miriam Defensor-Santiago lauded the high court for its decision on DAP.

“It’s basically a no-brainer. The DAP is illegal because it was not contained in the 2011 or 2012 budgets, and because the alleged savings were used to augment new budget items which was not previously authorized by Congress,” Santiago said in a statement.