And the OWS?car Goes to … People and Events that Raise Your BrOWS 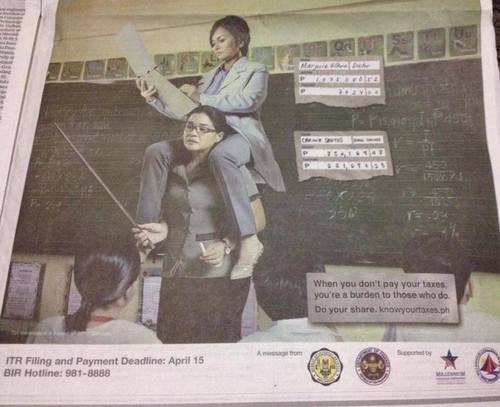 It’s awards season again and this time we have prepared a few “distinctions” for those who (or that) have shown remarkable, “ows-worthy” feats in the past week. These people, acts, and events definitely deserve our loud and condemning “owws?”

Common Pinoy expression used to show disbelief, disapproval, the state of being unconvinced, or the need for further explanations

Without any delay, let’s start handing out the Ows?cars…

Seriously? Does BIR really want to generalize the medical profession as a profession of tax cheats? Indubitably, there are doctors who don’t pay the right taxes. But does that give any government agency the right to brand an entire profession as a burden to the country? What would it feel if a group decides to publish a similar ad branding all BIR officials as thieves and corrupt public officials? We’re not sure what will happen but we feel like the government’s immediate response will be to use the recently affirmed online libel clause of the Anti-Cybercrime Law.

It’s okay to go for the shock factor when you are trying to market a product. It’s definitely not okay when you are insulting an entire profession. Wouldn’t it be better if the BIR simply cited the data they have about the non-payment of some doctors? Their previous campaign that featured number and percentages was way better.

We respect the lady commissioner’s intelligence but we disagree with her interpretation of the ad. The ad was clearly showing a doctor being a burden to a teacher, comparing their salaries and tax payments. Again, if what they really intended was a generalization of all professionals who don’t pay the right taxes, they should have let statistics or graphs do the talking.

It’s not right to say that the insult only works for those who felt alluded to. We can liken the ad to what happened when a Korean actress mocked the supposed Filipino English accent. Filipinos felt insulted or were at least displeased by what happened because we all know that many of us speak decent English unlike what the Korean actress was trying to demonstrate. It’s not about being offended because of guilt. It’s about having your profession associated with tax evasion. 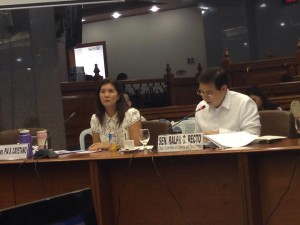 Senate President Pro-Tempore Ralph Recto filed Senate Bill 2146, saying that “it’s high time for Congress to revisit defamation laws, and recalibrate them in a manner that they can prevent and penalize malicious and unfounded attacks on a person’s reputation without stifling free speech and the open discussion of policies that affect the public.”

Can we pin our hopes on it? Hardly. Just remember what happened to Senator Miriam Defensor Santiago’s Anti-Dynasty and Anti-Epalbills. Also, where’s the Freedom of Information Law Mr. Aquino promised when he courted the public for votes? It’s the same old script with a new conflict and set of characters.

“Do I Have a Choice? Award”

The wife of the former Senate President has come out to express support for her husband. Despite Senator Enrile’s alleged womanizing, Mrs. Cristina Ponce Enrile is defending the gentleman from Cagayan against accusations of being a “smuggling king” and being involved in the PDAF scam. It warms the heart to see old couples living together even in their 80s or 90s. We hope, however, that they’ve had accumulated enough wisdom over their long lives to realize what is right and what is wrong – for them to try to do something right for posterity.

These are the actors who aimed to make it big but couldn’t seem to get the right break for them. That’s why they content themselves with small roles that let them experience some of the limelight, no matter how ridiculous the role is.

We salute party list congressmen Christopher Co and Rodel Batocabe for the ingenuity. Had they not filed their ridiculous bull that required people to fall in line, they would have never made it to national TV and print news. Those who laugh at them should think deeper. They’re just trying to be silly to attract some attention. If they actually aren’t, well, at least, we’ve had a good laugh.

“I Can Make You Believe Award”

We’re deferring the granting of this award until we can verify our frontrunner’s overwhelming “qualifications” to deserve it. Apparently, she has made people believe that she is an advocate for people and that she is fighting to protect the money paid by the citizenry through their taxes.

She is Mrs. Heidi Mendoza and she is being accused of having failed to pay around P2 million pesos in taxes for the money she supposedly earned from her consultancy jobs while she was not working for the government. Documents obtained by the unapologetically anti-Aquino newspaper, The Daily Tribune, reveal that Mrs. Mendoza earned P7,541,600 from 2007 to 2010.

What’s interesting here is that the alleged tax evasion is based on money allegedly earned by Mrs. Mendoza for speaking engagements, the writing of modules, and other activities related to fighting corruption. The Daily Tribune says that the state auditor was even able to purchase a condominium unit in 2007 and a townhouse in Marikina. Hypocrite? Crusading crook? We still need further investigations before we decide that she really deserves the award.

He is consistent and compelling (to many). Need we say more?  He just recently pulled the blame game card again in his visit to Malaysia. He certainly knows how to act like a president.

“Master of Schemes and Propaganda Award”

Interestingly, our seasoned politician from Makati has seemingly transcended from his usual text blast propaganda. He managed to have a very favorable Philippine Star headline written for him: “Politicians, ordinary folk want to join Binay.” He has had successive news articles about him, all of which are drumming up his 2016 ambition.

After bolting PDP Laban to build his new party, the Vice President seems to be doing all sorts of experimenting to assess public reaction. He appears to be attempting to disassociate the Binay name from the old Binay reputation by projecting himself as someone who is trying to start something new.

2016 is still some years away but the veep is keen on carrying out early preparations. He seems to be putting things to work this early to be forewarned of the risks his presidential ambition will probably encounter. Of course, he does not want to suffer the same fate billionaire Manny Villar suffered.

Also, take note of how he was able to drag the names of Senator Jinggoy Estrada (offering him his post in their political party), former President Joseph Estrada (also offering him his party post), Batangas Governor Vilma Santos (floated as a running mate), and businessman Manny Pangilinan (also rumored to become his running mate) all in one day. All the news about him had some sort of reaction that may have worked according to his plan. For instance, the Kris Aquino and Mar Roxas tandem was suddenly floated. It looks like he’s testing the waters to create the perfect plan for his 2016 candidacy.

“Metaphor of the Century Award”

It’s like the perfect depiction of Congress vs. Congress. How could this viral photo (or set of photos) not become our best picture? It’s a reflection of society and politics: two symbolisms of greed are battling it out for survival (no offense to the reptiles – it’s just a “human thing”). It’s calling to mind the current situation in the Senate and Congress.

In the end, one will win but we don’t know what’s next to that victory. It could be that the devourer’s belly ruptures because the one devoured is still alive and is out to retaliate, or, the devourer, now weak after stuffing himself to his limits (probably high on victory), gets attacked by another cold blooded predator.

And there you go. We apologize for having prepared just a few awards. The rest are still under deliberation. Hopefully, we can announce the rest of our deserving winners soon.

(by Bernadine Racoma, as originally posted on the Philippine Online Chronicles}

Photo of ad from Inquirer.  Photo of Senator Recto from Noemi Lardizabal-Dado. Some rights reserved.