5 Achievements of the Aquino Administration, and the Philippines in 2013 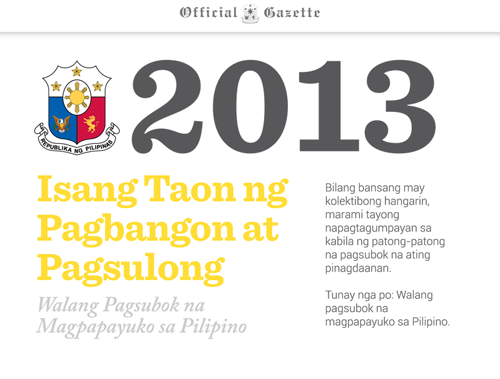 by Cocoy Dayao, as originally posted at POC/Blog Watch:  5 Achievements of the Aquino Administration, and the Philippines in 2013

Much has been said about the Aquino Administration in 2013, but what really happened in 2013?

The Philippines was hailed for its economic stability. For the first time, ever, three credit agencies gave the Philippines, investment grade status. For the common Juan, this means, businesses can borrow money at a lower cost, so business creation is faster, and so job creation can be faster. Moody’s analytics declared the Philippines’ “Asia’s rising star“. The country also jumped 30 positions higher in the World Bank’s doing business report.

In the past year, the country experienced five consecutive quarters of at least 7% GDP growth. This was driven by 14.58% in government investment in infrastructure, higher business and consumer confidence, expansion in consumer spending, strong in-flow of money from Overseas Filipinos, increase in tourism,

Three important things happened in the latter half of 2013. First there was the Zamboanga siege by the forces of Nur Misuari. Then there was the Bohol Earthquake, which was followed by the cataclysm called, Super Typhoon Yolanda.

The typical disaster response in previous years: we can not afford to do this. “Walang pera,” or we’re inadequate. The resources are razor thin. In fact, many news reports called the government to task with their response. But in all three scenarios, however imperfect the DSWD was there together with the national government to respond.

Second, prior to Yolanda’s landing, there was ample warning and many of the provinces that were hardest hit by the Bohol earthquake took extraordinary precautions. And they received minimal damage vis-a-vis other areas that took less precaution.

Third, it exposed many of the weaknesses endemic of the Philippine scenario. While there was increased capacity in dealing with disasters— remember, the government was essentially fighting at three fronts, with the entire central Philippines devastated, it had some of the resources to deal with it. Zamboanga fought and won. Bohol kept on fighting, and are on the road towards recovery. In eastern Visayas, while help dragged because of old style politics, there was a presence there.

The government’s disaster response is best described as half-full, or half-empty depending on who looks at it. For me, this was a win because it showed some capacity growth versus previous years. It showed proactivity in disaster preparation, though still far from the ideal.

3. The COA report and crusade for good governance

This year, the Commission on Audit’s “Citizen’s Participatory Audit”, a pet project of Grace Pulido-Tan won Bright Spots’ competition at the closing plenary of the Open Government Partnership summit in London last November.

As you could see, all these little things are important. The COA’s activities tied up rather nicely with the expose on Janet Lim Napoles, and the PDAF scam. The activity of the Commission on Audit was one of many tiny steps the administration took in its Daan Matuwid thrust.

The whole thing cascaded to a landmark decision of the Supreme Court on the PDAF, and related funds. If you read the Supreme Court’s decision, it described the history of the pork barrel system, and traced it from its roots to the current administration. It told the story of a practice that begun at the dawn of our country’s democracy. The Supreme Court’s decision on PDAF and on pork barrel system changed how the National Government plans the budget, and how it will ultimately spend it. So if in 2012 there was judicial reform in the form of impeaching Renato Corona, in 2013, there was legislative reform in the form of how the National Budget is prepared, and spent. All this bite size change— this process of transformation began in 2010, followed by a COA report, and the explosion and expose on the Napoles scam.

The long road to peace in Mindanao is almost there. In July this year, the government released the annexes of the Framework Agreement on the Bangsamoro, including power sharing agreement. Solons, and local executives back the Bangsamoro Basic Law. Senator Guingona says he too is in full support for peace. “We are here now closer than we have ever been before in rehabilitating Mindanao from the ravages of war,” the Senator wrote in a press release. “Filipinos have cause to be truly hopeful as both the government and the MILF work tirelessly to come up with an inclusive and participative framework that will truly benefit the people of Mindanao.”

It has been a challenging time for the Philippines as China becomes an external threat to the country. Last January for example, President Aquino says China harassed Philippine boats.

The Philippines has hardly any ships or armed forces. So it bought refurbished Hamilton-class cutters and commission the BRP Ramon Alcaraz in November 2013, signeda defense pact with South Korea, and recently took delivery of helicopters from Italy.

In April 2013, Time Magazine wrote that President Aquino was one of the most influential in the world in 2013. “The sputtering economy stabilized and became hot,” wrote Howard Chua-Eoan, TIME‘s news director. “Aquino pushed through a reproductive-rights law that many said was impossible in the fervently Catholic nation. Most important, he became the face of the regional confrontation with Beijing over its claim to virtually all of the South China Sea. It is a brave stance, the long-term consequences still unknown.” Chua-Eoan added, “For his courage, however, he really should have the pet name the family gave his eldest sister Maria Elena: Ballsy.”

Throughout the year, our tiny island nation pushed back against China. The Philippines’ mission, writes Chico Harlan for the Washington Post, “thwart China in its drive to control the vast waters around it.”

Did you hear that? No, not your neighbor’s Napoles firecracker exploding. That’s the sound of the bell ringing. The new year’s here, and 2014 is calling! We have a nation to rebuild. It is do-able. There is growth. There is hope, and a will to push for change.

Bloomberg quoted Ruchir Sharma. He is New York–based head of emerging markets at Morgan Stanley Investment Management. “The Philippines for decades was a lost country,” he says. “Now, it could end up being among the fastest growing in the world in 2013. It comes from having the right leader at the right time.”