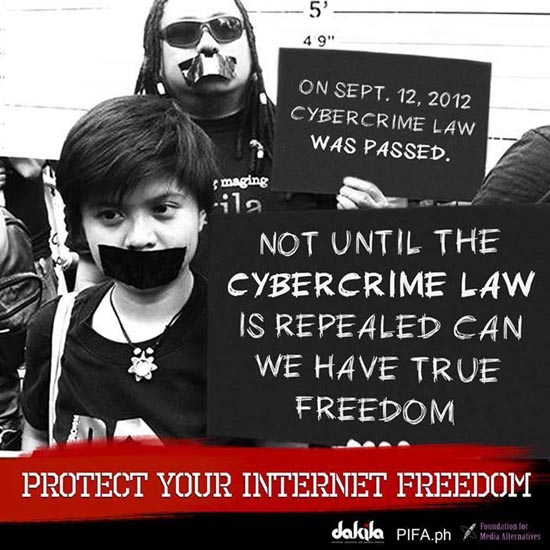 September 12, 2013 – One year ago today, Congress and the President would have imposed Cyber Martial Law – ignoring citizens’ outrage online – had not the Supreme Court ordered the Cybercrime Prevention Act (RA 0175) restrained indefinitely albeit temporarily.

Recent events show just how valuable Internet Freedom is in “speaking truth to power,” in particular, in reminding government that it exists to serve the people and not the other way around.

It was only through free and open social media that a multitude of Filipinos from all walks of life got to march to Luneta, calling for an end of the corrupt “pork barrel” system of political patronage.

Just days before the “Million People March,” many Filipinos had been discussing online how the nation’s coffers got plundered. Taxpayers’ money supposedly funded fake non-governmental organizations, only to end up lining the pockets of “well-connected” private individuals to feed their lavish lifestyles.

Internet freedom has allowed Filipino scientists, using open source software, to create “visualizations” demonstrating just how deep the rot goes across party lines. Laid bare on multiple electronic media platforms is a crime committed with the complicit (or else unwitting and inept) help of government officials. Can it be mere coincidence that those “Honorable” senators and congressmen who had pushed the hardest to get this law passed now find themselves in the vortex of corruption?

It is this very freedom that the Cybercrime Prevention Act of 2012 was designed to restrain. This law expands the government’s powers without affirming the state’s primary responsibility to protect and to recognize the democratic rights of its citizens on the Internet.

Internet freedom flows fundamentally from the human right to freedom of opinion and expression, which includes “the freedom to seek, receive and impart information and ideas of all kinds, regardless of frontiers, either orally, in writing or in print, in the form of art, or through any other media of his choice.” Last year, the United Nations (UN) General Assembly has endorsed the UN Human Rights Council’s affirmation “that the same rights that people have offline must also be protected online,” and that States have the obligation to protect and promote the same.

Although the implementation of the Cybercrime Prevention Act remains restrained, let us not forget that the Supreme Court’s order is only temporary. Pending the Court’s final decision, we must remain vigilant and urge the court and our lawmakers to ensure nothing less than a COMPLETE REPEAL of this draconian law.