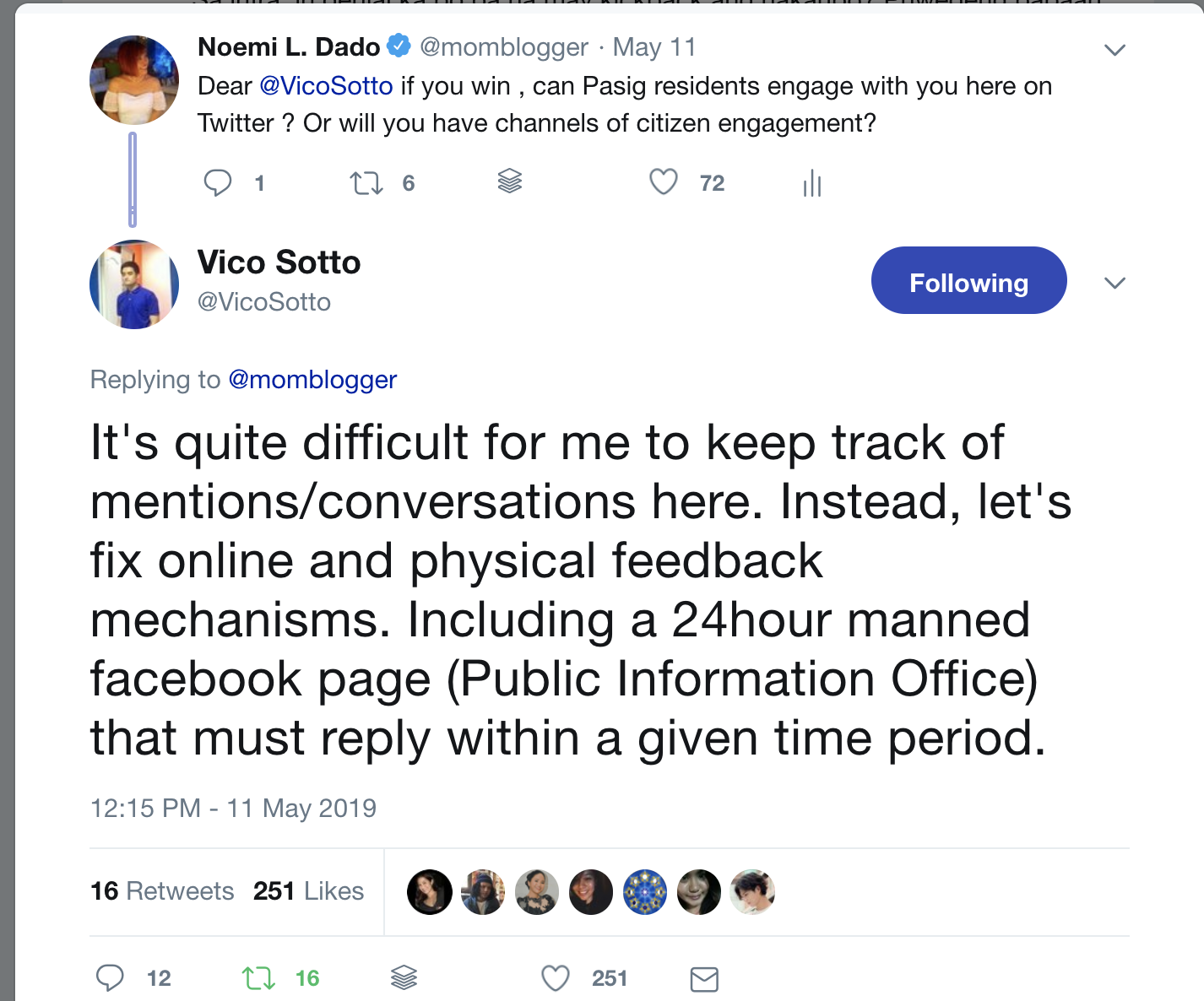 Several pleasant surprises and upsets happened a few hours after voting ended on May 13, 2019. While awaiting in frustration for the media report from the transparency server of the Commission on Elections (Comelec), I noticed the hashtag #ibaNaman trending on twitter at around 8 pm. Early results in the local level left many happy because these were unexpected, given the perceived continuing power of the incumbents.

Joseph Estrada lost the mayoral in Manila to Isko Moreno. Francis Zamora took the San Juan mayoralty and defeated Janelle Ejercito, daughter of Jinggoy Estrada and granddaughter of Joseph Estrada. Abby Binay won over her brother Junjun Binay in the Makati mayoral race. Dinagat Islands Rep. Kaka Bag-ao defeated another member of the Ecleo political clan, in the race for governor. But Mayor Bobby Eusebio losing in Pasig to Vico Sotto hits close to home. Why is there a shift in voter preference from the old, experienced hands to the newer and still willing-to-be-further-tested local executives?

I can only speak for my city. I wanted a change of leadership.

As a Pasigueño, I was oblivious of Sotto serving as councilor. I first learned of his candidacy on my Twitter feed. Sotto believed Pasig residents were looking for change. He talked about the Eusebio family sitting for close to three decades in Pasig City. The blue and yellow themed barangay halls or public spaces are a stark reminder of their stronghold. A tweet read “Time for new blood without the E scarlet letter, after 27 years.” As one of the co-founders of #epalwatch, being epal (a slang for “mapapel,” a Filipino term for attention grabbers) is a subtle way of campaigning very early on for elections. It was like they were campaigning for the last 27 years. If one is epal before Comelec’s mandated campaign period, then loopholes in the system are being used.

The impact of local politics is more personal and relevant to the day-to-day concerns of voters. The desire for something new is more palpable. He took the words right off my mouth, that people were not just looking for another mayor but a new style, without fear or utang na loob (indebtedness). A tricycle driver narrated the abuse of the blue kotong (bribery and extortion) boys requiring as much as P800 for a traffic violation. My helper noticed biko (sweet rice cake) disappeared from the public market as soon as plans of Vico Sotto were clear. Why do we need a budget of P100 million for an elevated walkway?

Twitter mentions led me to a photo of President Rodrigo Duterte endorsing Sotto. I know many competent officials appointed by the President so this is not an issue. My criteria on a clear platform and track record prevailed. He promised to monitor and ensure proper implementation of the Universal Health Care program in Pasig City to his constituents. According to him, it is time to change the culture of politics in the city by governing with “transparency.”

I had initial doubts. The Eusebio name is an established dynasty but what if I was enabling a new one? Sotto is the nephew of Senate President Vicente “Tito” Sotto 3rd, and cousin to Quezon City vice mayor-elect Gian Sotto. Before he ran for office, he mentioned on Twitter he was qualified and not because of his family name. “Civil society makes you see a different perspective,” he said in an interview three years ago. This is the perspective that led to the creation of his platform: people’s participation. I believed social media interconnectivity not only broke down bureaucratic borders but also set the stage for increased citizen engagement.

It was one reason I asked him on twitter “Dear @VicoSotto if you win, can Pasig residents engage with you here on Twitter? Or will you have channels of citizen engagement?” 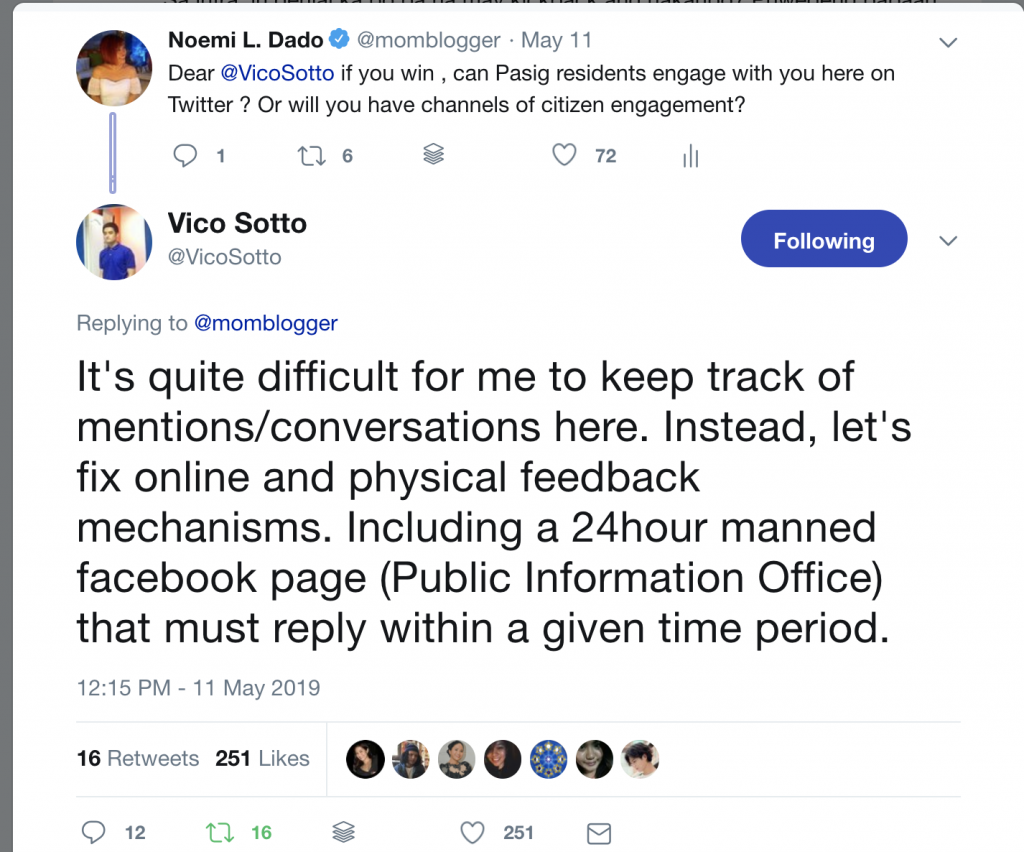 Sotto replied, that it is “difficult for me to keep track of mentions/conversations here. Instead, let’s fix online and physical feedback mechanisms. Including a 24-hour manned Facebook page (Public Information Office) that must reply within a given time period.”

Once convinced he was my candidate, I campaigned for him in my neighborhood and on private messaging apps. Tarpaulins of the two Eusebios running for Mayor and Congress flooded almost every house. It felt intimidating. I got lucky to take home a few tarpaulins when I knocked on a neighbor’s door. When I displayed the tarpaulins on my fence, my next-door neighbor followed suit. What sets Sotto apart from the traditional politician is that his tarpaulin contained no image of himself. It emphasized the phrases “Walang Palakasan, Walang Pananakot, Dapat Makabago” above his name.

Quite a campaign he ran on social media and on the ground. Sotto deserves to be our new mayor. The duty of a citizen does not end on election day. I will be vigilant and hold Vico accountable on his promises. The Pasigueños are full of hope. Just read the tweets with hashtag #ibaNa. A lot of congratulatory tweets were on the theme of wanting to be a volunteer, or moving to Pasig. A tweet from a nonresident friend says “Despite all the negativity with the senatorial election results, I look to Vico Sotto’s win with wide eyes and so much hope. It can be done. You can slay giants in Philippine politics.” “I think the mark of a truly great leader is if he’s able to pass it on to the next generation,” Sotto tweeted.
Yes, there is hope.

#ibaNaman means “we need new blood,” while #ibaNa is a “new order.”