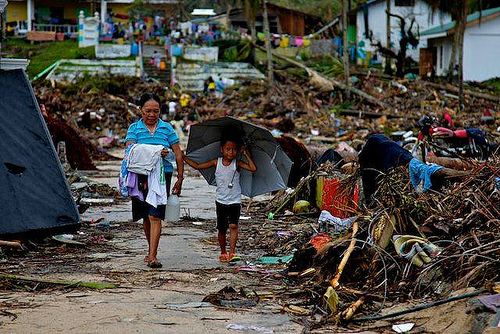 Today is November 8, 2015, and it has been two years since Yolanda wreaked havoc in Tacloban and its neighbouring areas. Yolanda took away the lives of 6,300 people. 1,473,521 families were affected by the loss of one or more of their members, their livelihood and their homes. Around 1,500 families are temporarily living in bunkhouses in the northern area of Tacloban, and over 10,000 Yolanda survivors are in danger of not having permanent shelter.

The survivors are now opposing the 7.9 billion Tide Embankment project of the Department of Public Works and Highways (DPWH).

Before families can be relocated to a permanent settlement, they have to stay in temporary bunk houses first. Apparently, there is a long line of families waiting for permanent housing.

The Tide Embankment project would take up space and also relocate other families. Survivors lament that some of those affected by the new project were given houses before their own resettlement issues can be resolved.

“Although there is already a relocation site, the backlog in the construction of houses for Yolanda victims cannot accommodate those displaced by the project,” Ms. Pauline Neyra, Executive Director of the Eastern Visayas Network of NGOs, said of the problem.

Santillan added that consultation is key, and that when creating big projects like the tide embankment, the social consequences have to be thoughtfully pondered.