On the ethics of exposing the #LewdParty 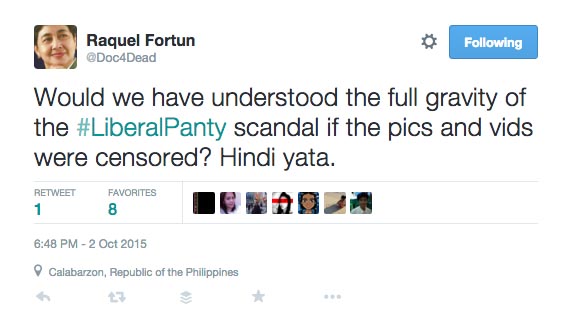 Would we have understood the full gravity of the #LiberalPanty scandal if the pics and vids were censored? Hindi yata.

That is the big question from Dr. Raquel Fortun (@doc4dead on twitter). Who would care about the Liberal Panty #TuwadnaDaan scandal if it weren’t for the photos and videos? Who would have known about the gravity? Ruffy Biazon, tweeted “Aren’t those who are making memes about the twerk also guilty of exploiting those women?” This tweet was used in a tumblr post who questioned Peachy Bretana and myself. To quote (I am not sharing the link ):

@momblogger and @peachybrets are guilty are guilty of this. Sharing is caring, indeed. Obvious that these two ladies and their ilk are driven by a political agenda, and are as guilty as Agarao and Tolentino of misogyny. They could have driven their point by strong words, but no. Those Playgirls videos and memes should be shared so that other’s eyes can be “opened.” Never mind that they are actually exploiting the victims to push their agenda.

This is what I have to say. Showing the videos and photos of the #lewdparty reveal the extent of the moral depravity of people who want to continue to be in power . Now, false argument is being used by the real exploiters to confuse the public but people are discerning. They know who the real exploiters are. Inday E. Varona replied to my tweet:

The tweet of Ruffy Biazon did not sit well with Dean Bocobo (@sagadasun) and the latter argued about the importance of showing the videos and photos to “oppose and expose exploiters of my sisters, mothers and daughters!” Ruffy Biazon clarifies that “I reject exploitation of women & advocate gender sensitivity.I don’t only talk about it, I take action with projects/activities.”

Read the rest of the discussion ( make sure to click READ NEXT of the storify to read Ruffy Biazon’s explanation ) :