Why is the Official Gazette publishing Liberal Party propaganda? 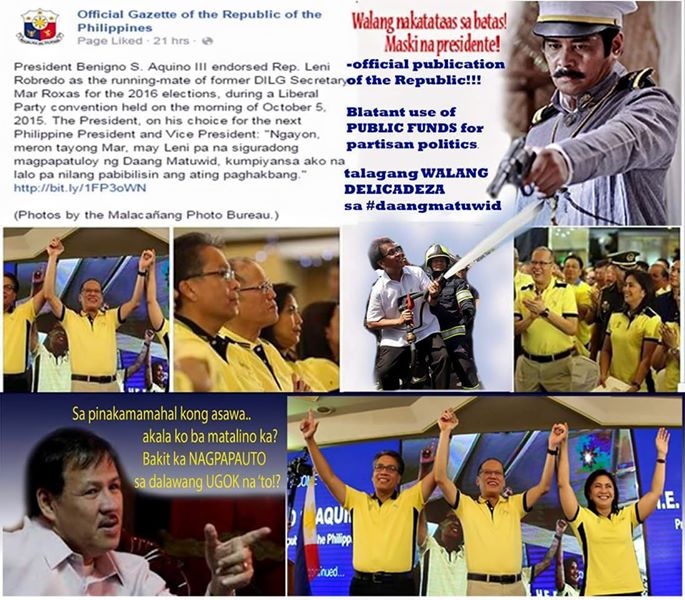 Dan Peckley asked ” Should such an article be on an official government publication? ” #Delicadeza

Photos of the endorsement of Mar Roxas and Leni Robredo are also found at the Facebook page of the President. 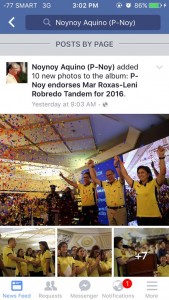 “Whose cause and at what cost to the sovereign people? Official page of the president managed by govt office using government funds but with endorsement of future candidates? Why should taxpayers shoulder that? What is the legal basis? While these materials contain info on party activity, they focus solely on president. Facebook page has photos of candidates endorsed by president – promotional materials which taxpayers should not be paying for.” asks @Chilimedley

Manuel L. Quezon III (Manolo)  replied on twitter that “convention and party speeches of all presidents from Quezon onwards are in official gazette as indivisible”

I replied that it is ” using public position and public funds to advance partisan interests.” to which Manolo says it is democracy.

“No, that’s not democracy. That’s abuse of power. Using the people’s money to promote your candidate is NOT democracy. Pls.”, asserts @chilimedley

That was our Twitter discussion yesterday. Today, the discussion resumes and Manolo provides the link of  https://archive.org/details/govph  and to check  the Revised Admin Code for the content since the 1940 expansion. For content, “The Official Gazette follows the precedents established since 1935, both in the Official Gazette itself, and in the Messages of the President series under the Quezon, Roxas, and Quirino administrations” (See content guidelines). Examples of what is permissible and impermissible are found here.

A long winding discussion on editorial policies belabor my point. This is our Tax money. Liberal Party CANDIDATES are not the President.

Read part of our twitter discussion with Manolo and click the tweets to expand the conversation.  Make sure to also click “read next” of the Storify to see the other tweets.