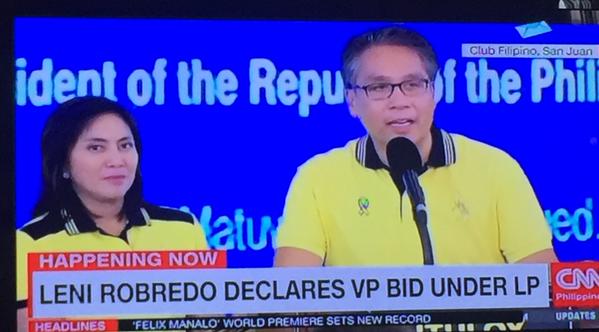 Netizens’ reaction are mixed. She is a breath of fresh air to the presidential bid of Mar Roxas. Vernee Jay Folgo says “Leni Robredo, her simplicity and her humble admission that she is inexperienced captures the true image of her sincerity.” Some are not comfortable with her decision. She is after all, the second choice of Mar’s choice as VP. Another says that Leni Robredo gave in to the desperation of President Aquino and like “Grace Poe, it’s too early for her to seek higher gov’t post, imo.”

Herbie Docena says it is just fair to ask “Where was Ms Robredo in our struggle against the pork barrel system? Why was she not with us there on the streets or in the halls of Congress fighting for accountability for the crime that was the DAP? Where did she stand in our fight against labor contractualization and why was she not with us in the fight against the MRT fare hikes? Why has she not spoken out against the killing of our lumad sisters and brothers? Why, indeed, has she chosen to remain with a party that has consistently promoted elite interests over the interests of the working people?

Taking the bus home and living a much simpler life is admirable but is that automatically proof that one stands with the common people? ”

I have no doubt that Ms Robredo is a decent person–certainly much more so than her slimy rivals. But since she's being…

What do you think? Read the rest of the reactions.