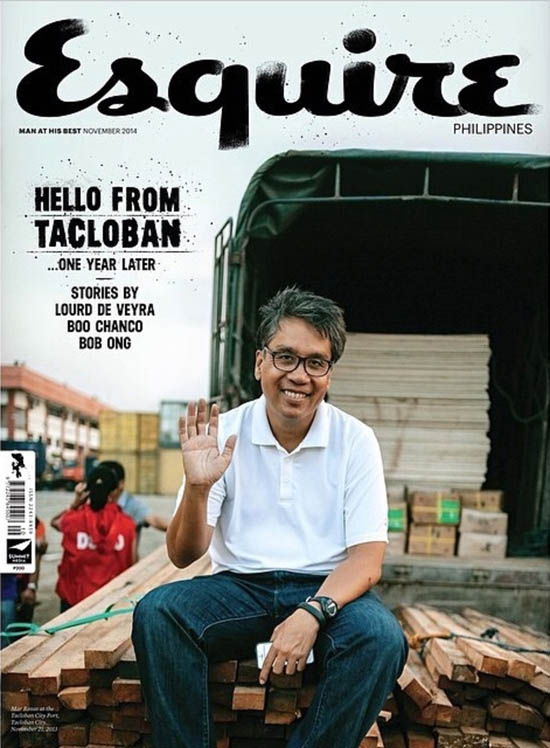 “Hello from Tacloban”. It was the cover title of a slightly offbeat but certainly reputable international magazine’s anniversary issue on the crisis brought on by Typhoon Yolanda (Typhoon Haiyan) on central Philippines among whose islands and cities Tacloban was among the very worst hit.

“Hello from Tacloban” by the very greeting alone immediately connotes an upbeat, rather light and sunny disposition, a bizarre and ironic juxtaposition of levity on a definitely heavy, morose and almost deathly issue which counts among its morbidity still countless dead approaching the original estimates of 10,000 and the even more fatal bungling of an inept national leadership that stupidly insisted on tainting rescue and relief operations with the color of politics and politicking.

Central to the magazine’s cover was a photograph of the secretary of the Department of the Interior and Local Government (DILG). It is no secret that, despite coy denials and even more coy falsehoods surrounding a deliberate, well-funded public relations drive towards the presidency, the current DILG head would like to be president of our damaged republic by 2016. The Liberal Party, through one of its officials, has already declared him to be their front-runner in the face of all that pose as counterpoints and counterarguments from a series of episodes of gross ineptitude, to revelations that his self-appointed brand, “Mr. Palengke” might actually be the diametric opposite of all it connotes.

People, disappointed constituencies, even close and intimate albeit betrayed allies, awakened, have come to realize, all-too belatedly, that indeed the secretary was born with a silver spoon in his mouth and that, whenever he talks, that yawning facial cavity that cradled it often spews forth virtual silvery spit and phlegm.

Note the evidence for the rather descriptive allegory on social entitlement. In a recent spat while on the greens of an upscale golf course in metropolitan Manila, a lowly employee paid not far above the minimum wage was viciously treated to the kind of venom only silver slime and spit can produce. Not long before that, amid a recently ravaged Tacloban, while deliberating rescue and relief efforts with Tacloban’s victimized local officials, the DILG secretary introduced into the equation the dysfunctional variables of politics, political patronage, partisanship and other aberrant conditionalities that, in a very real sense, might have bordered on political blackmail.

From the trivial to the tempestuous, these anecdotal illustrative episodes are far from the kind of caring behavior expected from a belligerent and fatherly landlord or scion of landed and learned gentry. Far from it. And far from the stereotypical “Mr. Palengke”. These are portents of a presidency not only detached from reality and the requisites of the responsibilities facing the DILG but one inordinately focused inwardly, perhaps selfishly and egotistically.

The venom elicited by the “Hello from Tacloban” cover and its accompanying photograph of what the traditionally better edited and more circumspect magazine might consider as the “poster boy” for the anniversary of one of modern history’s most unfortunate events is understandable. At his highest ranking in surveys for the 2016 presidency, the DILG secretary remains in the virtual nether regions and substantial light years far and away from striking distance of the presidency.

What venom was drawn may not actually be directed at the publication but was more a direct function of the public’s perception of the magazine cover’s subject and the paradoxic juxtaposition of a cheery message against a continuing record of ineptitude and bungling. As one reaction by a victimized citizen clearly and most eloquently stated “Tacloban’s wounds remain open”. And perhaps those wounds fester and remain open in a large part due to official ineptitude and bungling.

Some described the cover title and the photographic depiction as an example of journalistic “sarcasm”. That was perhaps the kindest description the publication received and it would not be a first for the magazine. Indeed, one of the principal writers for the anniversary issue is a known critic of the DILG secretary and the coincidence seems too coincidental to be an accident of fate.

But such sarcasm can backfire. The rest of the criticism against the cover ranged from “un-journalistic” to “insulting and insensitive” all the way to some very real and justifiable suspicions that the publication had allowed itself to be used as a public relations tool by a politician with sights set on the 2016 presidential elections. While we personally subscribe to the “sarcasm” notion where the cover might have actually mocked rather presented a government factotum as heroic, the greater public disgusted with such displays of insensitivity cannot be blamed given the empirical evidence and record of ineptitude that overwhelms the question of government responses to the crisis.

Most glaring is the manner by which the anniversary of the typhoon was recently celebrated and remembered. Rather than visit ground zero in Tacloban where thousands were killed by the typhoon and then later on by government incompetence, the national leadership instead decided to commemorate the calamity in a place were only 107 fatalities were recorded as against Tacloban’s 2, 678. Such illustrates the quality of our national leadership.

Allow us to revisit the rap sheet from the perspective of the victims, if only to understand government’s effective cowardice in remembering the Yolanda Crisis. The following has been culled from different sources, publications and post-crisis analysis. Admittedly, while we fall prey to Monday morning quarterbacking and succumb to criticizing from hindsight, these illustrations nevertheless remain relevant lest we install the same inept officials in the highest offices and allow them repeat their buffoonery in perhaps deadlier, more fatal degrees.

Note the concerns of victimized fisherfolk and others directly disenfranchised by the typhoon and then once more, repeatedly, over and over, by the serial bungling of inept government officials. Last month a deeply troubled non-government organization comprised in a large part of the typhoon’s victims had asked the Department of Justice (DOJ) to determine criminal liabilities committed by government agencies in aggravating the humanitarian crisis arising from Typhoon Yolanda.

They argued that “ it is extremely unpardonable to let go the President, DILG Secretary Manuel Roxas III and their men and free them from any criminal and civil accountability despite the glaring fact that the national government is principally accountable for the devastating impact of super typhoon Yolanda due to grand display of incompetence”.

They noted that two days before Yolanda struck the government bragged that C130 aircraft were “fully mission capable to respond to those in need” and that 32 planes and helicopters were on standby together with 20 ships pre-positioned in Cebu, Bicol, Cavite and Zamboanga.

As it happened, the aircraft was nowhere to be found in the first week following the typhoon. The ships arrived more than a week after the storm and all that was promised was “a 99 percent failure “. Worse, without coordinating with meteorologists, the DILG scheduled press conferences and evacuations for the late morning and noon of the very day the storm struck, totally disregarding earlier weather bulletins that the typhoon would hit well before dawn. Indeed, how many died because of that fatal mistake?

In the aftermath of the crisis, relief and rescue efforts were continuously marred by excessive politicking and partisanship that only the most ambitious can infect in times of calamities – as oblivious as these politicians are wont to be of the needs of the victimized, choosing instead to focus on 2016, hellbent on a presidency that is undeserved and ill-fitted for the colossally incompetent.

To be fair to the publication that decided to feature a rather insensitive, if not cruel photograph on its cover, perhaps the title “Hello from Tacloban” was a typographical error as one astute blogger noticed. Given the glaring realities, the more appropriate title should have been “Hell from Tacloban”.