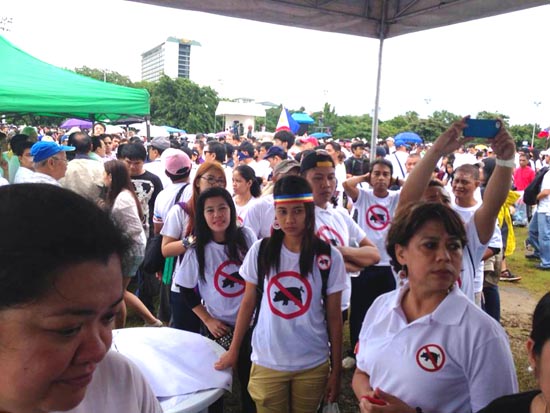 A list of demands for government reforms and concrete calls to action for citizens will highlight the October 4 Million People March @ Ayala.

At the press launch of the event, [email protected] spokesperson Patricia Tan said the [email protected] was set for 3 pm (start of assembly) to 8:30 PM so workers from the country’s financial district, students and residents of other cities can join the event.

[email protected] will also launch the #ScrapPork Network, composed of the coordinators of the August 26Luneta MPM event and other groups, individuals and coalitions that have united in the fight against pork.

Peachy Rallonza-Bretana, initiator of the August 26 Million People March, said heightened protests are necessary because the legislative and executive departments have merely tried to sugarcoat the pork barrel system under different schemes of accommodation.

#ScrapPork Network volunteers will be going around with sandwich placards around the Ayala malls today at noon and late afternoon to invite people to the rally and engage those who may have questions and want to discuss the campaign to scrap pork. Actress and activist Monique Wilson and several lawyers will be among the volunteers.

Speakers at the [email protected] will expose how pork remains in the Philippine budget being crafted by Congress – and in executive department funds that are allocated and distributed in circumstances that remain mysterious to Filipinos.

The rally will also call for a swifter pace of prosecution of ALL involved in various pork scandals, as well as reiterate the demand for the government to account for spent pork, including in the last three years.

With an expanded network of participants, the Million People March @ Ayala will be presenting concrete demands to the different departments of government, as well as launch a citizen-based monitoring and audit program.

Here are the three main calls of the [email protected] and the #ScrapPork network:

“SCRAP THE PORK BARREL SYSTEM. We define pork barrel as all state funds subject to discretionary use and/or allocation by officials in all branches and in all levels of the government. We urge all Filipinos to push hard for the scrapping of the pork barrel system, and at the same time, to continue the discourse on the best alternative to take its place — an alternative that will fully serve the interests of our people as a whole, and will ensure that public money is strictly and absolutely for the use and benefit of all Filipinos, and not just the greedy few.

ACCOUNT FOR ALL PORK SPENT. We challenge all government officials, officers and employees who received, allocated, or otherwise made use of these discretionary funds to publicly make an accounting of the same. We call on all Filipinos to demand such action from all levels of government and to maintain utmost vigilance until these public servants have accounted for all of the pork, down to the last centavo. We encourage fellow Filipinos to launch and share their initiatives to press for transparency in all levels of government and in all kinds of government transactions.

INVESTIGATE AND PUNISH THOSE WHO MISUSE PORK. The pork barrel scandal goes beyond the Napoles scam. We Filipinos must sustain our demand on the government to show its determination to prosecute and punish not only its political enemies but also its own allies and appointees involved in the misuse of discretionary funds. We must continue letting our voices be heard until the guilty are convicted with finality and jailed, to serve as examples to those who may want to follow in their footsteps, that public money must be used solely and exclusively for the benefit and in the best interests of the Filipino people.”