The impeachment trial of the Chief Justice of the Supreme Court is the talk of the town. It seems the whole country is standing still to watch the drama unfold. Well, it is undoubtedly a very important development in our country’s political evolution and concerned citizens should at least try to keep abreast with what is going on with this trial.

There is so much that has already been written and discussed regarding the impeachment trial. Commentary and opinions for and against the impeachment trial are all over the place. There is also a wealth of these discussions and reporting that are either objective or partisan in nature. Attack on the judiciary; necessity to remove a roadblock to progress; accountability; personal interests; good vs. evil; creeping dictatorship; rule of law; constitutional issues; constitutional crisis; etc…you name it, there is an available angle to this political and quasi-judicial exercise that has been effectively fueling debate on the impeachment trial of the Chief Justice.

Quite a smorgasbord of topics to choose from, so I figured I’d go zero in on a particular topic, one that concerns the effort of the team of Congressmen tasked to prosecute the Chief Justice. However, before I go further on that, let me state that I take no sides on this matter. My philosophy here is to let justice and the process takes it course. I’ve worked in government for more than a decade and a half, and what I learned from my stint in government is that institutions and ideals should prevail over personalities. It is in this context by which I view this whole exercise.

As such, the prosecution’s misadventures (bungling seems quite harsh a word to me) and travails have raised several disturbing thoughts in my mind. What concerns me with the prosecution’s woes is not so much the way they seem to be trying to mess up their case, but rather how it reflects on the attitude and character of people that have been elected to do something about the problems of our country.

The impeachment trial of the Chief Justice is being claimed to be a very important and momentous event, it is a centerpiece of the government’s reform agenda. According to its proponents, the death of corruption and the progress of our country depend on the successful outcome of this impeachment. A stumbling block to reform, good governance, justice and transparency has been identified (Chief Justice Renato Corona) and it is imperative that he must be removed from office. I mean, this is the impression I get when I read about the arguments advocating for the removal of the Chief Justice from the Supreme Court. So how come when I watch the prosecution team in action I can’t just see them taking this event as seriously as they claim it to be.

I mean it is one thing to mouth off sound bytes and posture about the seriousness and importance of the task at hand, but the way they have been conducting their prosecution of the Chief Justice betrays their lack of preparation. All of us who have had to struggle to earn a living know that if we got an important task to accomplish we work damn hard to get it done. How much work have these prosecutors invested in making an airtight case against the Chief Justice? They’ve been admonished by Senator Judges for being vague and not doing their homework. They have raised perceptions that they are simply fishing for evidence, meaning they trotted out charges against the Chief Justice without having any evidence to back up their accusations. They appear to be conducting their effort on the fly, improvising as they go along.

So how important is this impeachment trial to them anyway? One explanation for this is that they are either really stupid and don’t know what they are doing. I won’t buy that, they are experienced politicians with legal backgrounds, so they are competent enough. Besides, notable private lawyers are backing them up so it cannot be for lack of expertise and knowledge.

Perhaps one could say that the Chief Justice has a formidable defense team. If you’ve got the goods on the accused, I don’t think that would matter. If you’ve got a solid case, your efforts would be quite convincing and it will be difficult for the defense to counter that. I thought at first that was the case, they had the goods on the Chief Justice and their case was airtight. Yet we get instances where their very own witnesses made testimonies favorable to the defense and they have found themselves in a bind due to some vague aspects in the impeachment complaint that were not crafted properly or at the very least, confused the Senator Judges.

The more I dwell on the matter, the more I get the impression that the prosecution team has been very sloppy and complacent about their vital task. I can’t find any other reasonable explanation for the difficulties they are encountering and this brings me to the crux of the issue: a snapshot of what’s wrong with our politicians.

More than the bungling of their case, the attitude of hubris and complacency one gets from observing the prosecutors is a cause for concern. If this is how they approach a very important and vital task, how much more regular and mundane tasks in the legislature? No wonder then that despite the many laws we have, we hardly have made any progress.

Another worrying issue for me is the proclivity of the prosecution to conduct a campaign of trial by publicity. Why resort to this means? Make your case and use the process to get rid of the Chief Justice. Not only do you achieve your objective, you also reinforce and strengthen our democratic institutions. If you are convinced about the strength of your case, why resort to underhanded tactics aimed at forcing the Chief Justice to resign instead of convicting him in the impeachment court? As I said earlier, institutions should prevail over personalities; this is how we can move forward as a country. Taking shortcuts and making short shrift of our democratic institutions will only serve to keep us stuck in our current mess. This attitude from our lawmakers is a reflection of laziness and their disregard for our democratic institutions.

To be fair, there are many legislators out there who do honest work and put in great effort to get things done properly and for the good of our country. Unfortunately, they are either far outnumbered by those who aren’t or don’t merit attention from the powers that be who prefer more compliant allies to further their agenda. In which case, this is just too bad. Time to call out the prosecution on their shortcomings and failings; they better start taking things seriously not just on this impeachment trial but in all aspects of their work as elected representatives of the people. For the sake of our country, we cannot have this sort of attitude prevail amongst our political leadership.

Just imagine this, laws that will provide the regulatory and implementation framework for policies that will impact and affect sectors of our economy and our well-being being crafted in a manner similar to the conduct of the prosecution trying to make its case against the Chief Justice. The thought makes me shudder. For my peace of mind, perhaps I’d better just imagine the impeachment prosecution team as a bunch of clowns. 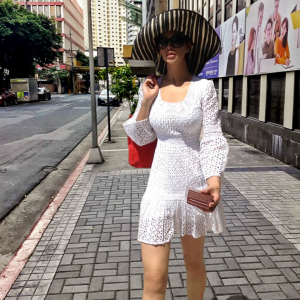 Recently resigned civil servant from the Philippine Foreign Service. Specializes in Protocol and served 3 Philippine Presidents. Assigned with her diplomat husband and son to Philippine Consulate General in Los Angeles and Philippine Embassy in Washington D.C. for 6 and a half years.