You’d think that after decades of typhoons and floods, we’d be experts by now, knowing when to call for class suspension. But why is it that every time we are hit with rains, parents are scrambling all over trying to find out whether classes will be suspended or not?

But now with the internet, Facebook, Twitter and mobile phones, it boggles the mind why confusion still happens each and every time we are pounded by winds and rains.

Why can’t government agencies disseminate information on a timely basis regarding suspension of classes?

Confusion has reached the point where even a site like maypasokba.com (means “Are there classes?”) tried to fill a gap. It now has a Facebook page with over 50,000 fans.

When the pouring rains from TS Falcon brought on flash floods everywhere, DepEd cancelled classes in all levels. The DepEd Twitter account (@DepEd_PH), was actively interacting with netizens at the height of the rains.

CHEd’s website, on the other hand, (www.ched.gov.ph) did not show any announcements, it had no Twitter account, and while it did have a Facebook page, the page only contained information with no active wall where announcements could be posted. 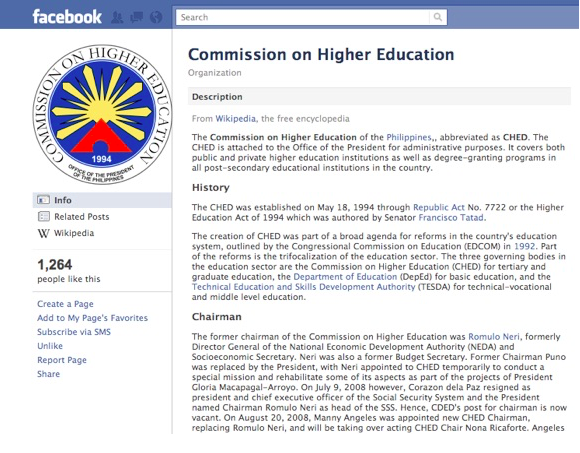 CHEd’s Memorandum Order No. 34, issued in 2010, only allows for automatic suspension of classes when it is Typhoon Signal No. 3. We all know that typhoon signals do not necessarily reflect rainfall and flooding scenarios. When CHEd Executive Director Julito Vitriolo was finally reached evening of Thursday, June 23, he allegedly reiterated that schools had been given discretion to suspend classes because CHEd’s policy only covered automatic suspensions. According to this article, his response got a lot of flak from the public.

Just to give you an idea of the confusion and the anger felt by the public, here are some tweets I found on Twitter:

Reach the youth where they are….ONLINE!

One agency that clearly went beyond the call of duty during TS Falcon was the Metropolitan Manila Development Authority (MMDA). They already had at least two Twitter accounts (@MMDA and MMDAtweets) but as rains continued and many parts of the metro were flooded, the tweets on both accounts became very active to the point that Twitter locked out both accounts due to over-tweeting. Although Twitter eventually unlocked these accounts at MMDA’s behest, they still created at least 4 other backup accounts so that they could continue tweeting street conditions in case of another lockout. Anyone on the road, connecting to the internet via 3G, knew where to pass and what roads to avoid just by reading MMDA’s tweets. I was a direct beneficiary of that service. I had to attend a despedida Friday evening when it was raining cats and dogs. Consulting MMDA’s tweets allowed me to check if my route was passable or not.

For the sake of real-time public service, CHEd (and may I say…all schools as well) need to be visible online. Here are my initial suggestions:

1. Modify CHEd Facebook page – It already exists. You just need to tweak the settings so that the Wall becomes visible. Use your Wall to update the public on the status of suspension of classes.

2. CHEd should create its own Twitter account and mandate the same for colleges and universities under its jurisdiction – Twitter covers a larger online public, including those who have no Facebook accounts. Designate an administrator (must be social media savvy) who is duly authorized to tweet official updates and statements and can engage the tweeps (how people on Twitter are called). Posting updates will be so easy because the Twitter administrator need not even be at work. He/she can even post an update any time using a mobile phone and a 3G connection from just about anywhere. May I also add that it is to CHEd’s advantage to claim the @CHEd Twitter account before someone else does so.

4. Set clear guidelines on the timing of announcements – Media should not be running after CHEd for a pronouncement only to be told it is at the discretion of schools. That is a big disservice to students and parents. Once the situation hits a pre-defined critical situation and the public needs to be advised on suspension of classes, the social media accounts of CHEd and schools should go into action.

Since tri-media is already on social media sites, it
is so easy for them to pick up one simple tweet from CHEd or a school and retweet or announce this over their own networks. Students themselves will naturally disseminate these announcements to their own circle of friends via their social networking sites and mobile phones.

A Postscript for Local Government Units (LGUs) as well

There are at least two LGUs with Twitter accounts: @sanmateorizal and @valenzuelacity. Both accounts were active during TS Falcon with situationers. Why can we not also have ALL LGUs set up Twitter accounts for times like these? Some LGUs have Facebook pages as well. But like CHEd, many do not make their walls visible in order to engage the public. Why??? Facebook is for engaging, not simply for one-way information.

The websites of LGUs likewise lack social media widgets. Only Valenzuela City’s website has Facebook/Twitter links but even then, these are located at the lower bottom of the homepage, requiring viewers to scroll all the way down to even see them.

With this generation of students preferring to go online rather than watch TV, it is common sense that any service directed at them should also be online. I hope we get to the day when everyone knows exactly which online sites to go to in emergency situations and get real-time, updated information and advice. Our children should not be put in harm’s way and made to go out into heavy rains and floods unnecessarily, due to delayed pronouncements. If CHEd is to be an effective agency of higher education, it needs to adapt quickly to this social media savvy generation.